I travelled to Portland, OR this past weekend to participate in the USA Triathlon Age Group National Championship race. The Olympic distance triathlon (1500 meter swim, 40 km bike, 10 km run) took place at Hagg Lake, just southwest of Portland. The race venue was absolutely gorgeous. Even after this, my third visit to the Pacific northwest, I am still in awe of the region’s beauty. 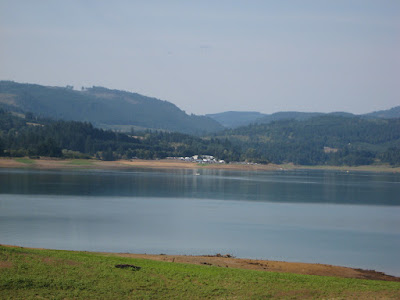 The race venue can be seen across Hagg Lake

I arrived in the early afternoon on Friday, the day before the race. I had to pick up my race packet and check in my bike before 7 pm. My flights, car rental, and hotel arrangements all went off without a hitch. As I drove on part of the bike course on the way to the race venue my initial feeling of awe and wonderment for the beauty of nature around me slowly turned into a feeling of uneasiness as I saw how hilly the race would be. I live in central Illinois, quite possibly the flattest place on Earth. I trained long and hard for this race, but I simply didn’t have access to this type of terrain. History has shown that I’m surprisingly good at riding uphill for a flatlander, but would I be good enough? 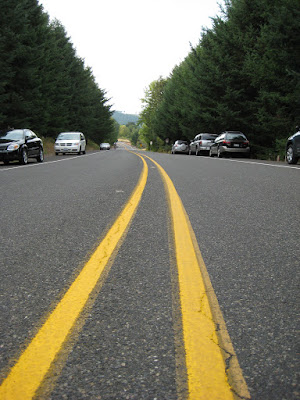 The bike course curved through the woods around the lake

I picked up my packet and was quite pleased with the swag, both in terms of quantity and in terms of quality. Many races typically hand out some crappy 100% cotton t-shirt and a few small trials of some company’s products. This packet had two high quality technical shirts, a nice hat, a nice towel, good race shoelaces, a poster, and (after the race) a nice jacket. I swear half of the Portland airport was wearing that jacket the next day.

I unpacked and assembled my Bike Friday Pocket Rocket (including aerobars and Speedplay pedals) before taking it out for an easy spin on the 20 km loop around the lake. I was eager to see exactly how difficult the course was going to be. Did I mention it was really hilly? At this point I was glad I chose to bring a bike with drop bars rather than my TT bike with bullhorns. I knew I would spend a lot of time with my hands on the brake hoods while going uphill, and a lot of time with my hands in the drops going downhill. 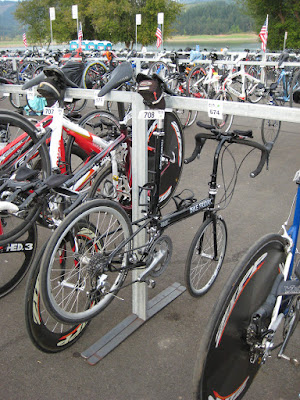 The Pocket Rocket in a Zipp Disc wheel sandwich

After the ride I checked my bike into the transition area with all the other (bigger wheeled) bikes. As I was walking in a complete stranger wanted to take a picture of me with my “cool” bike. This was just the beginning. I must have talked to at least 20 different people at the race about the Pocket Rocket. There was a lot of fascination with it. Even during the race several people made comments. As I was passing a woman uphill I heard “Oh wow, that’s cool!” Or as some dude blew by me downhill he’d look over and say “Nice bike, man!” Now imagine how that sounds with a Doppler Shift. 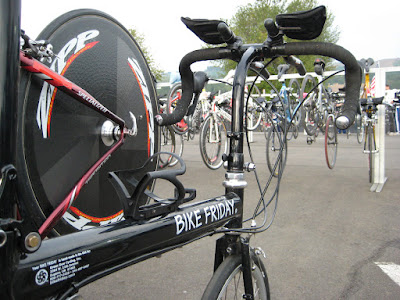 It was a long day of travel and race preparation. Back at the hotel I loaded all my race gear into my backpack while watching my favorite pre-race movie, American Flyers (once you get past the cheesy 80’s veneer it is a really great movie). 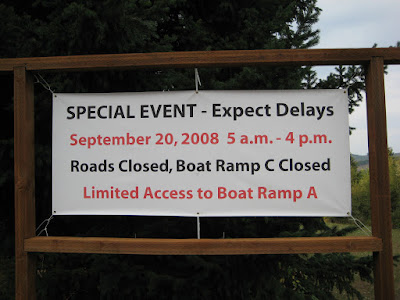 I woke up at 4:15 am the next morning and headed back out to Hagg Lake. Of course, it was completely dark at this point. The 1200 race participants and spectators all had to park in a grass field outside the park boundaries because the roads were all closed for the race. They had school buses hauling everyone from the parking lot to the transition area. I arrived with plenty of time before the race started so I was able to properly prepare everything. It was a nice change from being been way too rushed in all my previous triathlons this year. 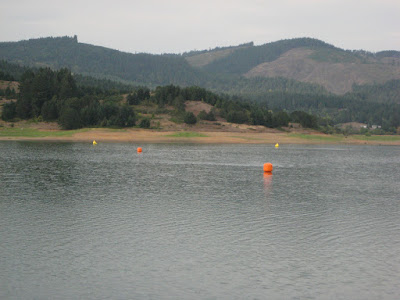 The swim course went clockwise around the yellow buoys

The air was cool, in the low 60˚s. The water was slightly warmer, but it sure didn’t feel that way. It was no San Francisco Bay, but it was no temperature controlled swimming pool either. Swim waves started every four minutes. My 30-34 age group was the 10th or so wave. 44 of us lined up in the water next to the dock and before I had time to take it all in the starting horn sounded and I was swimming like crazy. Fortunately, it wasn’t very crowded, so I wasn’t getting kicked or elbowed (or hit with a stick).

The group split up pretty quickly. About 2/3 of the pack pulled away from me, while the remaining 1/3 fell behind me. I spent most of the swim by myself in between these two packs. About halfway through I found another guy and tried to swim with him for a little while. I was swimming hard, but well within myself. I’ve been doing a lot more swim training recently, so I felt more comfortable in the water. I knew I was going to improve on my time of 28:10 from the Evergreen Tri, but I didn’t know by how much. I checked my watch as soon as I exited the water and I saw 25 something something (officially 25:17), which was about as good as I could have hoped.

Next I had two challenges almost as daunting as the swim. No, not biking & running (not yet, at least). I needed to get out of my wetsuit and run up a long hill to the transition area. You see, I’ve only worn my wetsuit in one other race in the past five years and it didn’t quite work out the way I planned. I had a really difficult time taking it off and I lost probably 45 seconds just fighting the neoprene cocoon. I practiced two or three times at the pool recently, and steadily improved. Luckily, I had no problems getting it off during the race. 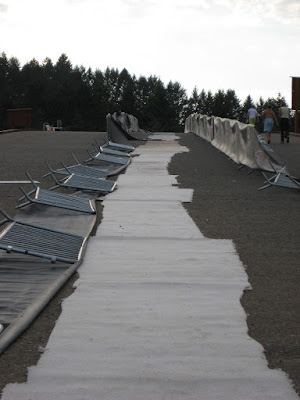 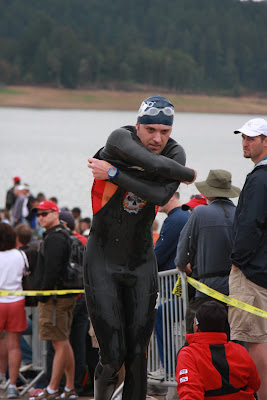 I ran up the hill, perhaps faster than I should have. By the time I mounted my bike after the first transition I looked at my watch and noticed my heart rate was 180, which was a bad sign. I feared this would be a repeat of the Dairyland Tri (Racine, WI) in 2003. In that race my heart rate started too high on the bike, I never recovered, and I had a terrible run. So I intentionally started the bike a little slowly to allow my heart rate to drop. The whole first lap was a bit of a struggle for me. Five miles into the bike I reached the big hill. I ascended at 8 mph. 8. miles. per. hour. And as slowly as I was going, I was actually passing people.

By the end of the first bike loop (of two) I was feeling much stronger so I was able to pick up the pace a little on my second loop. I ascended the big hill at a whopping 9.5 mph the second time, again passing people. I got into the habit of passing many people on the uphill sections and then getting passed by a few of those same people on the downhill sections. And I wasn’t going slowly on the downhills (max speed 38.6 mph). 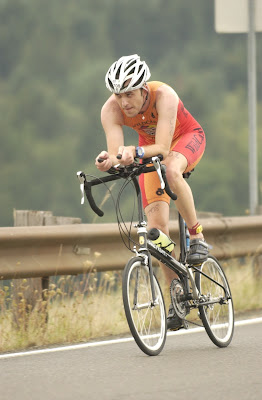 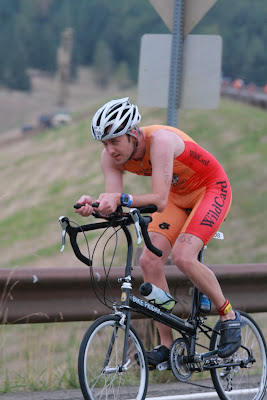 I finished the bike in 1:08:38, somehow managing to average 21.7 mph on a very difficult course. Again, it was really as good as I could have hoped. The Pocket Rocket performed amazingly well. 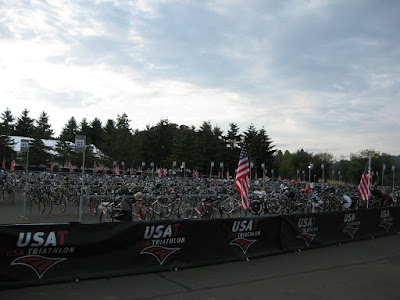 My second transition should have been super fast, but it was almost a complete catastrophe. I ran down the wrong row and became slightly disoriented when I couldn’t find my transition area. I ended up wasting close to a minute. My slow transitions were the one aspect of this race that clearly needed improvement. 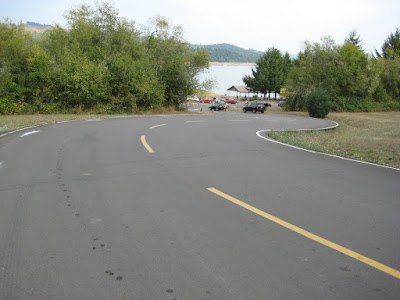 This photo doesn’t do this hill justice. It was steep. 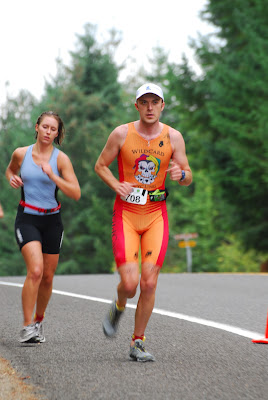 Heading out on the run there was a short, steep hill. Then another. Then a longer hill. Etc. The run course was hilly as well, and again, I don’t train on hills. Like the bike, I started out a little slowly. I could tell right away that I felt better at the beginning of this run that I did at Evergreen Tri, but the hills were going to be challenging. Still I was able to slowly ramp up the pace to run negative splits. My first mile was around 7:00. Next was 6:55, then 6:58, 6:47. I really picked it up and ran the fifth mile in 6:20 and finished very strong. My run split was 42:24… faster than at Evergreen Tri (which was completely flat). Again, it was the best I could have hoped to do. 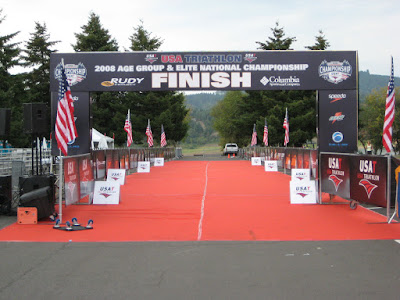 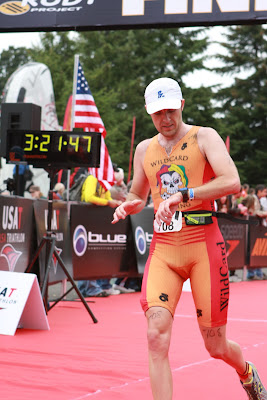 My final time was 2:20:34. I finished 28th place out of 44 in the 30-34 age group. My time was 20 seconds faster than it was for the same distances at Evergreen, but this course was much harder and it had longer swim->bike transition. Individually, compared to Evergreen, my swim was 3 minutes faster, my bike was 1 minute slower, and my run was 30 seconds faster. All things considered, I had a great race. 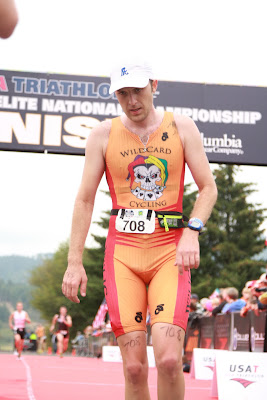 This photo sums it up pretty well

About 20 minutes later my friend Martin (who started later than me) crossed the finish line. We’re generally a pretty good match for each other, but he said he had a bit of an off day. He had some troubles breathing on the bike & run and that slowed him down a little bit. He finished in 2:23:41. His swim was 6 minutes slower than mine (ouch!), his bike was 5 minutes faster, and his run was 3 minutes slower. 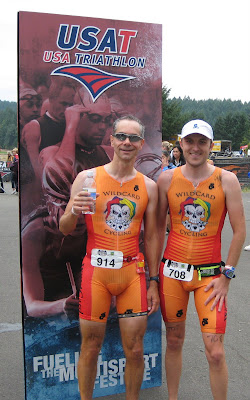 Competing in the Age Group National Championships was a fantastic experience. And now that I know there’s an Age Group World Championship race… I guess I’ll need to figure out how to drop 13 minutes off my time in order to qualify for it :)