Last Sunday was the Eads Bridge Duathlon. It starts and finishes on Eads Bridge (the oldest bridge across the Mississippi River) downtown, with a 1.5 mile run, followed by a 10 mile bike, and finishing with another 1.5 mile run. I haven’t ridden my time trial/triathlon bike since September, but I’ve been running well… so it should all even out. Right?

The race itself was very well organized, which almost makes up for the dearth of useful information on the event website. Answers to simple questions would have gone a long way. How do I get to the event with all the road closures? Where do I park my car and do I have to pay for parking? Is the event sanctioned by USA Triathlon (and therefore require an up-to-date USAT license)?

During my warmup I tried on my friend Mark’s aero helmet, which he was looking to sell. It worked well enough, so I decided to go with it during the race. I noticed my warmup on the bike was not as fast as it felt. I guess I’m more out of practice than I thought. I ran a short warmup, then headed up the hill from the river onto the bridge, where the start/finish line was.

It was cool, 48˚F. Moments before the start I began to feel raindrops. The announcer sent us off and I wasted no time rubbing shoulders with the leaders. The run was so short I knew it would be quite fast. We ran across the bridge, down to ground level on the Illinois side, then back up across the bridge in the other direction, down to ground level on the Missouri side for the first transition. About halfway through the run I ceded a little ground to two other guys. The run turned out to be a little long, 1.73 miles according to my GPS, and I averaged 5:23 pace.

I came into the transition area a little more hypoxic than I’m used to in a triathlon after swimming. I had a bad transition, trying to changes shoes while balancing on one foot and light-headed. The fourth runner passed me in the transition area, but I passed him right back as soon as we got on our bikes. I took the start slow, with the uphill, the railroad tracks, the rough corners. Finally we hit the long straightaway. Now a different rider blew past me. I picked up my game a bit and hung with him for a few miles. At the first turnaround I could see the two leaders had a sizable, but not insurmountable gap.

At the end of the first lap I lost my concentration a bit and dropped back from the third guy. As soon as we started on the second loop we were mixing it in with lapped competitors just starting the bike leg, at which point I completely lost sight of the guy. With each turn I could see the three people ahead me getting farther and farther ahead. I tried not to look down at my GPS to see my speed, because it wasn’t very reassuring. I wasn’t having a good ride. At this point it was pouring down rain and my shoes and socks were completely soaked. The advertised 10 mile course was short, only 9.4 miles, which means my average speed was only 21.5 mph. Even factoring in the awful weather, that’s weak, even by my standards. 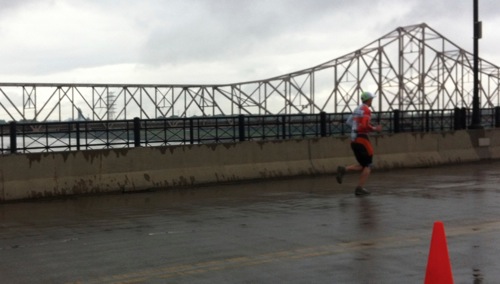 My second transition was a bit better, but still not great. I started out well enough on the second run. Then I immediately hit the large hill, and I slowed way down. Up on the bridge I could see the person in front of me off in the distance. The gaps were huge at this point, minutes in both directions. Cold, wet, tired, I found it difficult to push the pace and I just cruised into the finish line, averaging 6:18 pace for the second 1.73 mile run. I finished fourth place.

Melissa and Will were waiting at the finish line. In the rain. They were nice enough to come out to cheer me on. We didn’t waste much time on the bridge before we headed down to my car to dry off and warm up. The race went reasonably well, even if I was rather disappointed in my bike leg.

One thought on “Eads Bridge Duathlon”