Last week I overhead a local runner mention that registration was still open for the Leadville Trail Marathon on Saturday. Perhaps a bit too embiggened by successfully doggy paddling through my first high altitude race at Pilot Hill, I thought I may as well jump into the deep end.

It really doesn't take much to talk me into a race. I'm sort of easy like that.

The marathon starts in Leadville at 10,200 feet above sea level (higher than I’ve ever run before) and goes up from there. The course consists of three big mountain climbs, the highest of which tops at at 13,185 feet. It was an excuse to race, an excuse to go back to Leadville (we briefly visited on our vacation last summer), an excuse for Melissa to get in a high altitude training run before she tackles the Estes Park Marathon next weekend, and an excuse to drive through some of the most beautiful scenery in the country.

We arrived for packet pickup on Friday. After a couple hours at that elevation I got a headache (just like last summer). This didn’t bode well. That night I was getting winded walking back and forth in our hotel room. I didn’t sleep well. But when I woke up I felt like a hundred dollars. Game on.

I’m short of breath walking back and forth across my hotel room. Tomorrow’s marathon tops out 4,000 ft higher. Nice knowing you.

A late trip to the porta potty left me pretty far back at the start line of 1100 combined marathon and half marathon runners. No matter, I was fully intending to start slowly, as I had yet to run farther than across the street at that altitude. I honestly had no idea how my body would react. 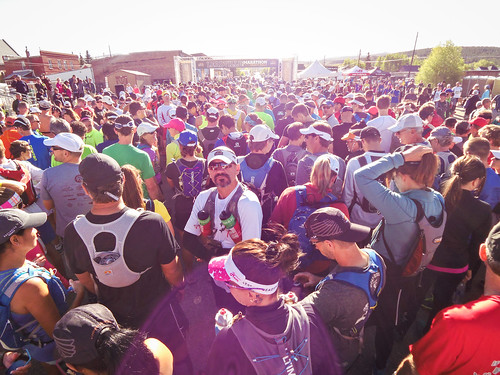 Well, it was a bit ridiculous. People were running far slower than even my slowest estimate, so I worked my way up the outside. There were people who started near the front who stopped to walk after just a half mile. I spent the first 1.5 miles passing a couple hundred people. As the marathon runners split apart from the half marathon runners I counted the people ahead of me and I was 29th marathoner. 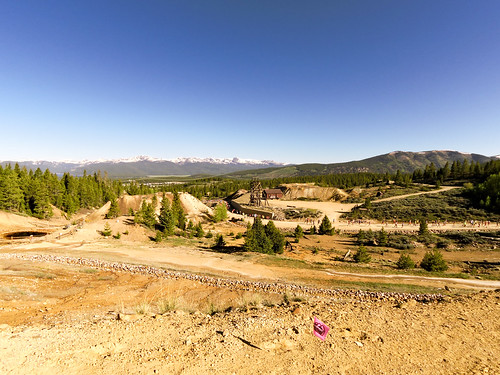 I wasn’t running super fast, but my legs and breathing felt reasonably good at this point. My mouth and throat were super dry from the parched air. This made it difficult to drink my somewhat sugary sport drink. So I got behind on hydration early in the race. That was a bit unexpected. 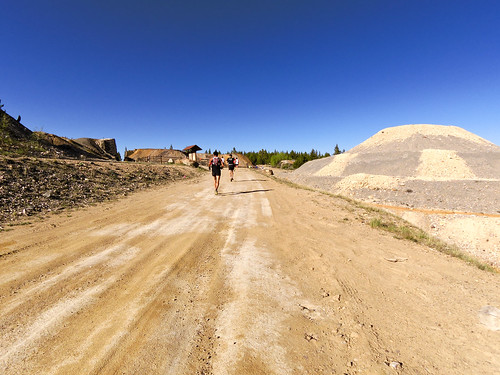 I ran (slowly) the first climb while several people in front of me starting hiking. By the first downhill section I was up to 20th place or so. I picked up a few more on the downhill then a few more as we began the push toward the first mountain summit. 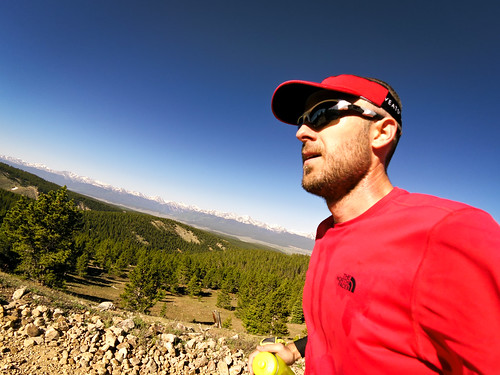 During the early miles I was gradually catching up to one runner who looked fairly distinctive. He was wearing Hoka shoes and shirt, in his 40’s, clean cut. After chasing for a few miles I finally caught and passed him just before the summit. Of course, he blew past me on the descent, but I would catch back up later. I had made it as high as 11th place (I could see 5th-10th place within 100m of me) before dropping back a bit. 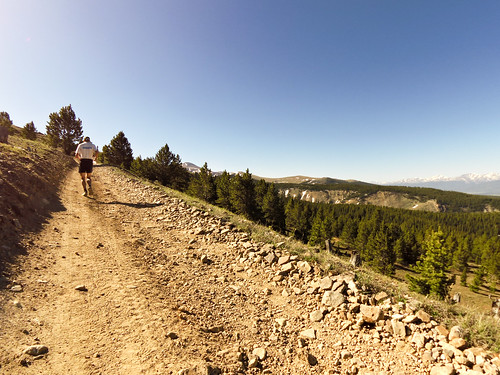 Melissa and Will were waiting for me at one of the aid stations just at the start of the climb up to Mosquito Pass, the high point on the course. I kept right on moving with a slow jog on the easier grades and as fast a hike as I could manage on the steeper grades. I came into the race fully expecting to hike (rather than run) most of this climb. It’s long, steep, and at very high altitude. My friend in the Hoka gear left me in the dust at this point. A few other marathon runners and I leapfrogged each other. 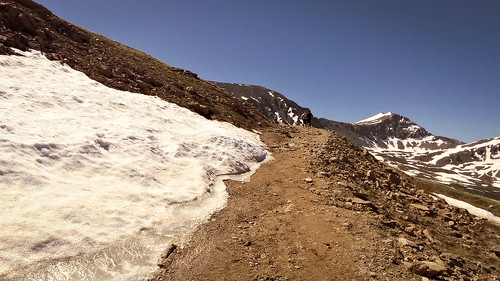 The bigger ordeal was that the marathon and half marathon runners were now on the same course again, mixed together. But the marathon runners had covered about twice the distance by this point, so we were mixing it in with significantly slower runners. This wasn’t a problem early on in the climb where the trail was wide, but toward the top the trail became much more narrow and I was frequently held up trying to pass people with two-way traffic on the narrow trail. 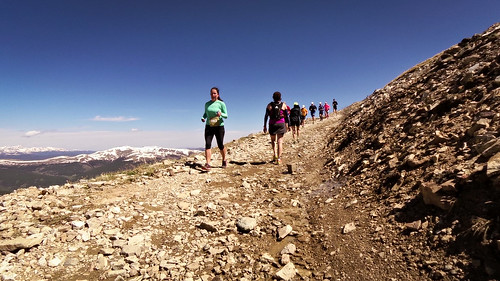 After a long, arduous hike I reached Mosquito Pass (13,185 ft), took a selfie, and turned around and ran down. I was expecting the descent to be super fast and relatively easy. I was wrong on both accounts. The footing was terrible with lots of large loose rocks. There was two-way traffic on a relatively narrow trail. But my biggest problem was every time I tried to run fast (which should have been easy on a long downhill) I had fairly intense discomfort beneath my ribs. It wasn’t exactly my lungs, nor my stomach, but it was something, and it prevented me from getting up to any kind of speed. 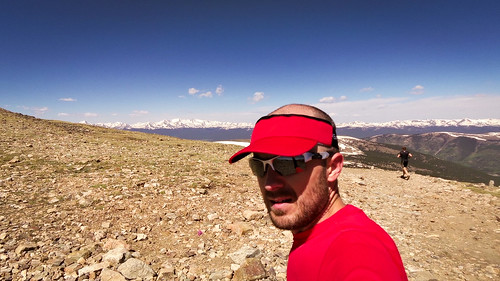 And that was just the beginning of my woes. After several miles of descending I had absolutely nothing left in my legs once I started back up the final mountain climb. I was expecting to run most (if not all) of it, just like I did on the way out, but I hiked every step. A couple times I tried to take a step forward and almost ended up going backward. It wasn’t pretty. This was the first section of the race where I couldn’t see anybody either in front of me or behind me. I was all alone for a solid mile up this interminable climb.

Then as I neared the top, a pack of six guys passed me like I was standing still. Oh right, there’s a race going on. It was mostly downhill from there to the finish so I tried to get the wheels rolling again. I did okay until one last final uphill section where I struggled. Then it was all downhill to the finish. Except I couldn’t go because of the discomfort in my ribs/lungs/stomach area. I ran the last two miles at 6:40-6:50 pace and people were still passing me. There was a stiff headwind on the long final straightaway, prolonging my pain.

By the finish I had dropped to 28th place. I’m okay with that, even if it’s a far cry from where I was early in the race. I looked at the results and verified a few time checks before I came to the stunning realization that my friend in the Hoka gear was Dave Mackey (2011 Ultrarunner of the year). And then it hit me like a big fucking mountain (I may have literally slapped my own forehead), I screwed up. Big time. I had no business running with, much less passing, a runner of his caliber that early in the race. I didn’t feel like I was running too fast, but I was. It came back to bite me late in the race when I had trouble moving forward up the final mountain climb.

My time of 4:41:46 makes this my slowest marathon finish, though that was to be expected given that this was by far the most difficult course I’ve run. Surprisingly, I had less soreness in my legs after this race than just about any marathon I’ve ever run (I was prepared for the worst), though the soreness in my glutes (which I’ve never experienced before) may have made up for it.

Now that I’m a bit wiser and more experienced, I’d certainly be interested in coming back and racing in Leadville again. I think I could do things better the next time around.