The Tour de Grove is a bike race, but in an apparent attempt to appeal to a wider audience they added a 5K run. Bike races typically offer prize money to the top finishers, and given the Tour de Grove attracts a lot of professional teams, the prizes are fairly large. It’s not unheard-of for a foot race to offer prize money, but it’s typically only the biggest events with the top talent. This 5K was pretty small, yet offered serious prize money ($1700 total for top three men and women). I had a feeling this would attract some good runners, which meant fast people to test myself against. The criterium later in the day didn’t appeal to me (flat course with 8 turns), but the run definitely did. The choice was easy. I didn’t have any delusions of placing in the money, I just wanted to run a fast time.

As I mentioned previously, I have been laboriously honing my running form over the past several months. I’ve been very successful in my training runs, but I had difficulty focusing on my form during my last 5K race and I unfortunately reverted to my old heel-striking gait. But I’ve continued to progress since then and I was convinced this time could be different. 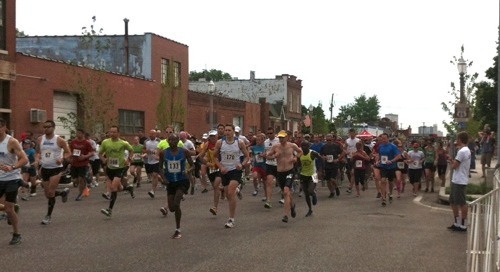 The start was a bit disorganized. There was no actual start line, so everyone tried to make sure we were all even as the race began and we took off. I was somewhat conservative for the first quarter mile before I started to make my way through the pack. A half mile in I reached the front of my group and the next closest runner was already far enough ahead that I had no chance of catching up. From that point on I ran the rest of the race by myself watching the guy up the road pull further and further ahead.

The run was a bit surreal. It felt like a high school 800m or 1600m track race to me. Until that point I hadn’t connected the dots to realize those races were the only times in the past when I actually ran on my forefeet (what I’ve been training myself to do for months). And here I was, with great concentration, doing it again. My watch beeped, indicating the first mile. I didn’t look at my time. I didn’t want to know.

I finished the first lap (of two) as I passed the start/finish area where Melissa and Will were watching. I couldn’t spare the energy to even look over at them. A few blocks later my watch beeped again, indicating the second mile. I didn’t look at my time. I didn’t want to know. 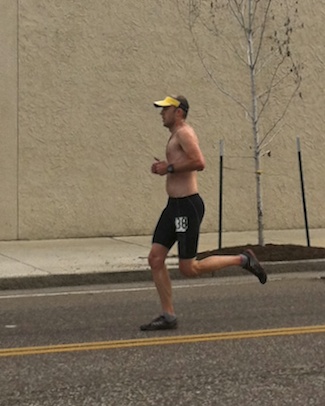 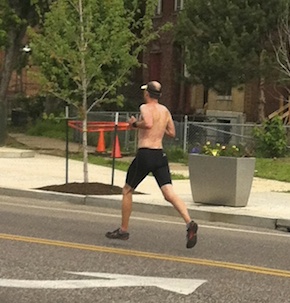 Not landing on my heel 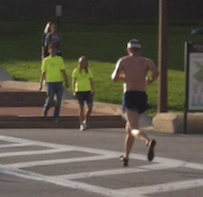 Landing on my heel in the previous 5K

I was still moving fast in the third mile, but I had slowed down considerably. This is the part of the race where you just want it to end and you hope a whole bunch of people don’t pass you. My watched beeped, indicating the third mile. I was still a long way from the finish line. Well, shit. The course was long, so even if I did run what would have been a good 5K time it would be masked by the extra distance. I pushed across the finish line just 4 seconds ahead of the top three women who were barreling down on me. With that much money on the line I couldn’t blame them.

So I ran a fast time, and I did it while (and perhaps because of) maintaining good form the whole race. Mission accomplished. The one downside is that, even several days later, my calves are still sore from this race. They are really underdeveloped, and it’s going to be a while before I can quickly recover from an effort like this.