With all the training I’ve been doing it would be a shame not to throw a race in the mix. I’ve been a little apprehensive about doing so, though, due to, well, fear of sucking. 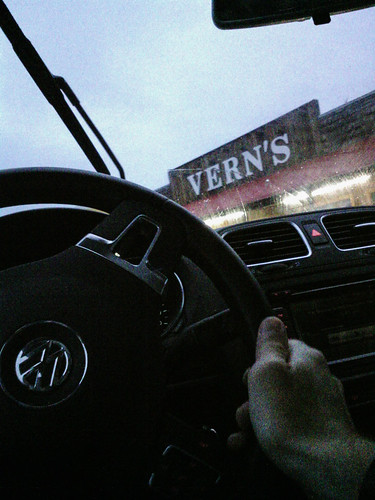 A bunch of people from Fort Collins were heading up to Laramie, WY for the Pilot Hill 25K (the oldest footrace in Wyoming) on Saturday, so I thought I might as well give it a go. On our way through Laramie we passed the University of Wyoming track, which sported the greeting “Welcome to 7220.” Feet. As in, “Welcome to high elevation. Good luck, buddy.”

This race seemed simple enough: 2 miles flat, 6.5 miles uphill, 6.5 miles downhill. Wait, what? I’ve never raced that far uphill or that far downhill. I’ve never started a race more than 800 ft above sea level. What have I gotten myself into?

“What have I gotten myself into?” — @ragfield (Elevation: 7200 ft) pic.twitter.com/s9ziLXvgey

A high double digit number of participants toed the start line and we were off.

I started easy/cautious/scared shitless. My breathing was labored. Having just moved up into the top 10 I covered the first mile in just under 7 minutes. I was already struggling. I moved up a couple more places before we started the 6.5 mile long, 1600 ft climb to the top of Pilot Hill. As if the elevation and the ascent weren’t enough, we faced a stiff headwind the entire way up the hill. Welcome to Wyoming. I was moving in slow motion. It was demoralizing.

Around 8500 ft I started to get side stitches pretty bad. I struggled the rest of the way to the top, minutes behind the runners ahead of me, though not as far back as I was expecting. Maybe they’re half-human after all.

I took a quick drink of water at the aid station at the top before I turned around and bombed the downhill. I clicked off a bunch of 6:15 miles before the trail started to level out and I slowed a bit. I was starting to catch the runner in front of me, but at one point he simply vanished (I later found out he took a wrong turn). I maintained the status quo on the descent, not gaining any time on the 5 runners remaining ahead of me, while putting a few minutes into the next closest runners behind me.

We moved from sea level 2.5 wks ago, and @ragfield proves he can run w the big guys. 6th place overall, 1st shirtless pic.twitter.com/uY853efdNE

I finished 6th place, 1st shirtless (it got hot by the end…). It was as good as I could have hoped to do. It was hard. Well, all races are hard, but this was hard in a slightly different way than most races I’ve done. Despite the big climb, this race was less hard on my legs and more hard on my lungs (if that makes any sense).

So now that my fears of racing at high elevation have been somewhat alleviated, I decided on a whim to jump into the deep end and run the Leadville Trail Marathon this coming weekend. It starts over 10,000 ft and climbs a couple of mountains up to 13,185 ft. The last time I decided to run a marathon a few days before the race it went pretty well. I don’t know what this weekend will have in store for me. But hey, what’s the worst that could happen?