This past weekend I travelled up to Chicago to attend a Mac software development conference called C4. This was the third year the conference was held (named C4[2], the previous two editions were C4[0] & C4[1]), though it was the first time I attended it.

It shares much in common with WWDC, Apple’s annual developer conference, yet there are many stark contrasts. WWDC has been growing at an unmaintainable rate. This year there were around 5000 attendees. This C4 conference had 170 attendees, including many well known and respected names in the world of Mac software development. Both conferences include technical presentations on various development topics. WWDC sessions are presented by Apple engineers, but C4 sessions are presented by other application developers.

C4 is not widely publicized and I just happened to find out about it by reading other developers’ blogs and Twitter posts. I quickly became excited and signed up a few hours after registration opened, which was fortunate because it filled to capacity a couple hours after that.

The trip started last Friday morning when I rode the Pocket Rocket to the train station in Champaign. Melissa accompanied me on her bike to see me off. When we arrived at the station I folded up the Pocket Rocket, put it in a big nylon carrying bag, walked in, picked up my ticket, and sat down in the waiting room. The Amtrak train was almost an hour late, but before I knew it I was showing the conductor my ticket and boarding the train. This was a somewhat new and interesting experience for me, as I had never ridden on a train around these parts.

I arrived in Union Station in Chicago and headed straight to the food court, as it was past lunch time by now. I lucked out to find a Mexican restaurant, where I could get a veggie burrito, connected to a Cinnabon. 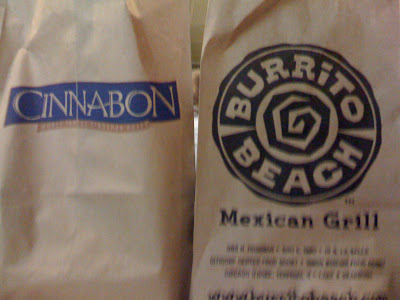 After partaking in the delicious meal I headed outside, unpacked my bike and rode off. I had a little time to kill before the start of the conference so I took a quick trip over to the lake shore path. Next I hit up the Michigan Ave. Apple store. I arrived at the hotel where the conference was to take place plenty early and waited around for a few hours. Lots of other conference attendees were arriving during this time and I chatted with a few of them. The conference started with a dinner and a couple opening sessions. It was after 11 pm before the conference ended. I whipped my bike back out and rode about four miles north to my cousin Scott’s apartment, where I would be sleeping. Or so I thought.

I arrived. We caught up a bit and talked about bikes. I met his friends. It was now approaching midnight and his neighbors were still having a raging party upstairs. The music was unbelievably loud and people were literally jumping up and down. I finally fell asleep somewhere between 1 am – 1:30 am. The party was still going on. Thank goodness I can sleep through anything.

Chicago has ridiculous traffic, lots of stop lights, and plenty of potholes. I had been wondering how these guys trained in this and I got a crash course (not literally) in big city training. A group of nearly 60 (3-4 times the size in my normal training rides) rode about 25 miles to Highland Park. It was a pretty easy pace on the way up. Half (including me) turned around and headed back to Chicago. The ride back was a lot crazier. It basically turned into a road race where 20 or so riders were all jockeying for position at 28 mph. Meanwhile traffic was all around us. We had to slam on our brakes for a couple stoplights. It was a little more dangerous than my typical training rides, but it was never out of control. I handled it pretty well on my little bike and I got lots of surprised comments about how well the bike did. I love this little thing. 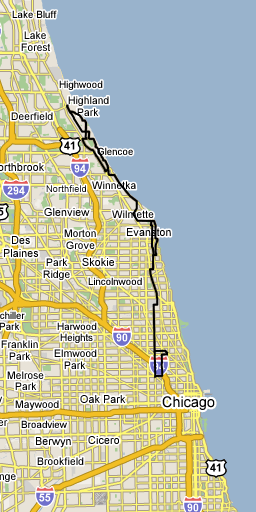 I ended the 50 mile ride back at Scott’s, then showered and biked back downtown to the conference. There were more interesting talks all afternoon. Between talks, during meals, etc. I met lots of really interesting people who were working on a wide range of projects. There were developers who worked solo in their spare time, people from small, 3-15 person companies working in small teams, people (like me) from medium, couple hundred person companies, all the way to people from Adobe, which employs thousands.

That night was a pizza party, where I met more interesting people. Again I rode back to Scott’s late. Again his neighbors were throwing a wild party. Again I fell asleep despite them.

I slept in slightly longer before Scott and I took a ride down the lake shore path all the way to his office at the University of Chicago. We almost went past Barrack Obama’s house, but Scott couldn’t remember which street it was on. I tried out his fixed gear bike and he tried out the Pocket Rocket. It was an interesting experience. After my recent purchases, a fixed gear bike is really the only kind missing from my collection… but I’m not in any real hurry to get one. It was a little too weird for my tastes. I never really felt safe and secure on it the way it do on… well, any other bike.

I attended more conference sessions on Sunday afternoon. The conference ended with a coding competition, somewhat similar to the defunct MacHack conference. Eight or so developers showed off simple iPhone programs they had written using GPS/location functionality with the theme “paranoia.” There were apps detailing crimes that had take place near you, all the way to a “spy” stealth distress beacon. The eventual winner was a little off-topic, but was technically interesting so most attendee voters overlooked that detail. Somehow it combined an iPhone, a Wiimote, and a Mac to build a simple gesture based drawing program. The contest winners were awarded a MacBook Air, and dozens of software applications donated by conference attendees (including a free copy of my application Mathematica).

The conference had ended a few hours before my train was to depart back to Champaign so I rode around downtown for an hour or two. 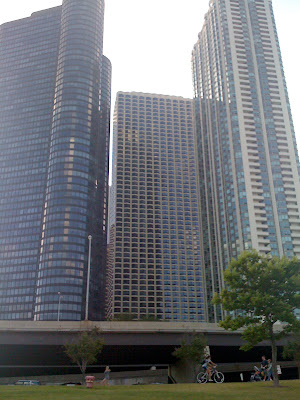 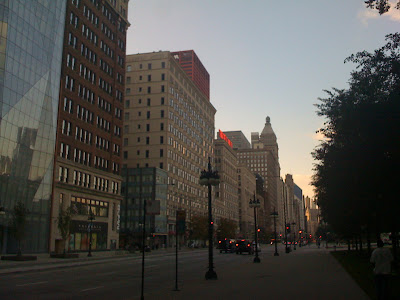 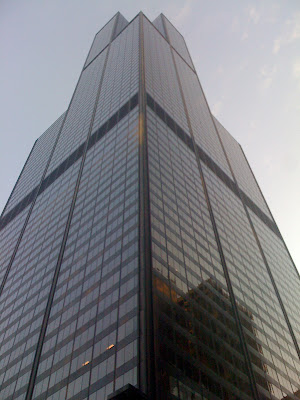 After my joyride I returned to Union Station, packed up my bike, and went straight to the food court… only to find everything closed. What? It was 6:45 pm. In a panic I went back out and walked a couple blocks, lugging my heavy backpack and my bike in its bag with me. I found several restaurants. All were closed. Ridiculous. Time was running out so I went back to Union Station, bought $10 worth of overpriced junk food, and boarded the train home. The Fig Newton’s were good, but I would have preferred dinner.

The ride home was fairly smooth. I fell asleep pretty quickly in my exhausted state. When I woke up a short while later I set an alarm on my phone to ensure I wouldn’t sleep through my stop in Champaign. It worked. Another short bike ride later I was finally home and very quickly fell asleep in my comfortable bed.

So that was my weekend, and as Melissa speculated, I was rather proud of myself to have done the entire thing without the assistance/hinderance of an automobile.