In 2003 I wanted a SLR camera to replace my old Vivitar, but at this point I was already accustomed to the extraordinary convenience of digital cameras. Digital SLR cameras existed, but they were targeted solely at professional photographers (and they were priced accordingly). That is, until the end of 2003, when Canon released the Digital Rebel (EOS 300D). The Digital Rebel was the first digital SLR (DSLR) camera priced under $1000, and it wasn’t targeted at professional photographers. It was targeted at me. 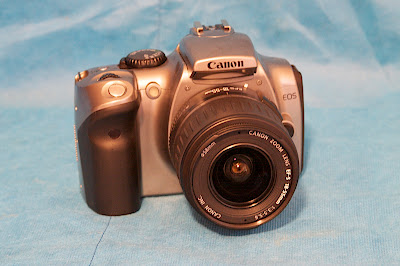 Shortly after the camera was released, Digital Rebels could not be found anywhere. There was a huge demand for this device and it was sold out of every store that carried it. I went to cameras stores. I went to electronics stores. I went to generic stores that carried cameras or electronics. While visiting my grandparents for Christmas my dad accompanied me while I looked at half a dozen stores in Evansville, IN. I think he thought I might be a little crazy looking high and low for a camera. I mean, it’s just a camera right? 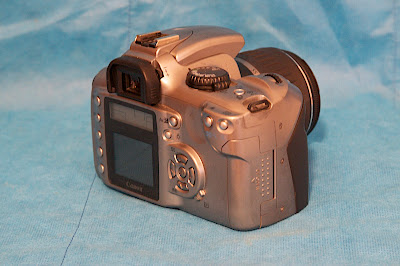 Back home in Champaign I put my name on a waiting list at a camera store, and I made daily visits to Best Buy. Eventually, a guy working at Best Buy was kind enough to suggest (quietly) I check back on Wednesday morning. I checked back Wednesday morning, and they had just received two Digital Rebels. I immediately tried to acquire one, but there was some bozo right in front of me (the store had just opened) who was looking at it. Ahhhhhhhhhhh!!! JUST LET ME BUY MY CAMERA!!!

After five or so of the most impatient minutes of my life the bozo walked away and I was able to purchase the camera. Finally. I left the next day with my parents to go to Texas to visit my brothers for Christmas, where I was first able to test it out. It was amazing. 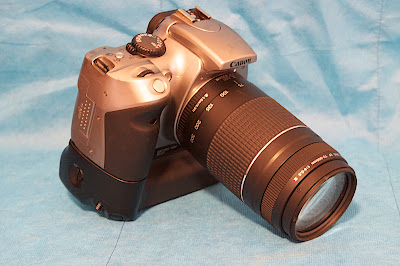 I’ve now had the camera for almost five years. A few days ago the four-digit photo counter reset to zero, meaning I’ve taken over 10,000 photos with it. It’s still great, but it’s showing its age. So I’ve decided to retire the Rebel. Two days ago its replacement arrived, a brand new Canon 50D. This new camera takes (significantly) higher resolution photos, has better low light (high ISO range) performance, has a gigantic high-res LCD screen (the 3″ display has the same resolution as my first 15″ computer monitor), works with all my old accessories (lenses & flash), and (thanks to an extra attachment) can wirelessly transfer photos to my computer and phone (which I’ve wanted for quite some time), and can directly geotag photos.

2 thoughts on “The Rebel”