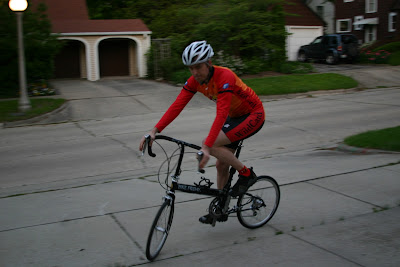 Two years ago when I ordered my Bike Friday Pocket Rocket, I opted to go with the Shimano Capreo cassette/rear hub combination. This system is specially designed for small wheeled bikes (the Pocket Rocket has 20″ wheels). Normal cassettes need to have at least 11 teeth. Since the Capreo system has a smaller spindle (at the end) it can go down to 9 teeth. This allows higher gear ratios on small wheeled bikes without using bigger chainrings. 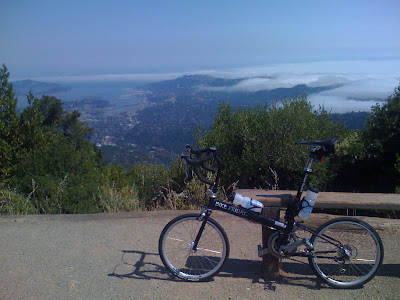 This is a great general purpose range of gears that will work for everything from ascending a mountain to descending a mountain. Unfortunately, I live nowhere near any mountains. Champaign County Illinois is the flattest place on earth. So I don’t need all the low gears, but I would like to have a set of gears which are closer together so there’s not a very big jump when I change gears.

The thing about the Capreo cassette is that the smallest four cogs are a non-standard size and they all fit together in a special way. The hub spindle is too small for cogs from any other cassette to work. So the 9-10-11-13 tooth cogs are essentially fixed. The largest five cogs are all standard sized, so I could replace all those with different sized cogs.

The first challenge is removing the Capreo cassette. Since it is a non-standard size a standard cassette removal tool won’t work. Shimano makes a custom tool, which I purchased a while back (from England, since none were available in the U.S. at the time), though I haven’t used yet. I whipped out the tool, positioned it on the cassette, and the instant I turned (before applying any real force) the brand new metal tool snapped. Sigh. So now I have to replace that tool. On the bright side I happen to live four doors down from a friend who also owns a Bike Friday with a Capreo cassette. Gary was nice enough to let me borrow his (also unused) tool despite the very real chance I might break it as well. I eased into it and the tool didn’t break, but it did take quite a lot of force to remove the cassette. The Capreo cassette’s lock ring has large grooves which must be turned against each other to remove the cassette. With the cassette off I was able to scavenge cogs from two other 9-speed cassettes (now that I’ve upgraded my road & TT bikes to 10-speed drivetrains) to produce a mutant hybrid cassette much better suited to the flat lands of central Illinois. I ended up with 9-10-11-13-14-15-16-17-19 tooth cogs. This cut the percent differences between gears roughly in half. I really wish I could get a 12 tooth cog in there because the 11-13 change is still 18.2% apart! Alas, the 13 is fixed for the Capreo cassette.

I tested out the new gears yesterday pulling Fig in his trailer. Even dragging the trailer/parachute into 25mph gusting headwinds the low gears were perfectly adequate.