Last weekend I had the brilliant idea to drive up to Rocky Mountain National Park again for a nice long run up another big climb. I was apparently not the only one who planned something along those lines. 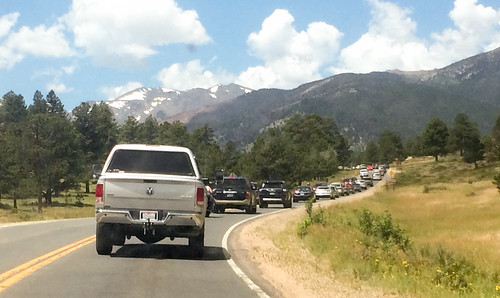 After waiting in lots of stop-and-go traffic all the way through Estes Park and up to the park entrance I finally made it in. Now I can relax. Except as I’m driving toward my preplanned trailhead parking lot I pass multiple signs saying all parking lots are full and suggesting I come back in a few hours. Grrr. Like everyone else on the road I proceeded anyway and reached a full parking lot. I drove multiple laps around the lot before seeing the shuttle bus had arrived and it was dropping off people coming back to their cars from Bear Lake. I picked out a couple, stalked them back to their car, and pulled into their parking spot the instant they left. Now after noon, I can finally get started. 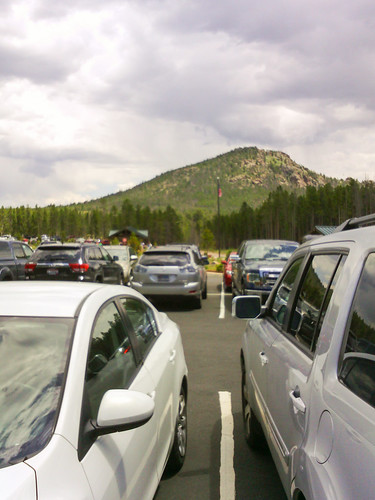 This trail started at 8,600 feet, and (as the full parking lots indicated) it was much busier than the last one I ran at this park. I don’t know if it was the holiday weekend, the fact it was later in the day, or most likely this was simply a much more desirable location. 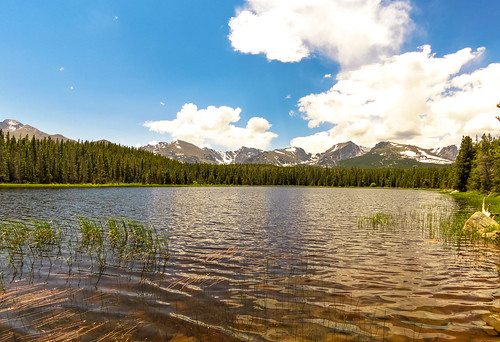 Next, I climbed and descended a few miles up the trail to reach Bear Lake (9,400 feet), which was also nice (and also much more crowded).

After Bear Lake the trail got steeper. It varied quite a bit from smooth and runnable, to much rockier and hike-worthy. 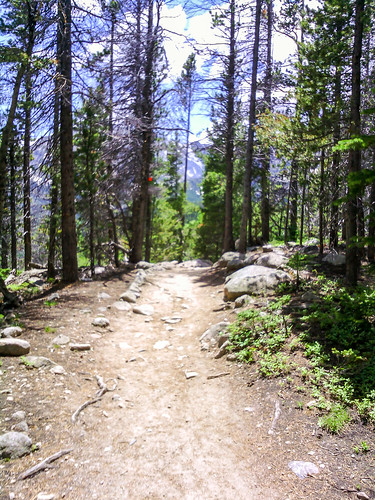 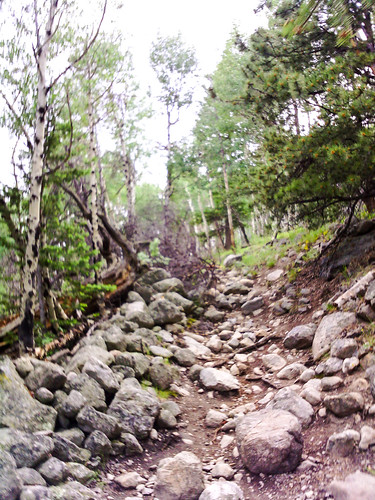 I started to hit some leftover snow around 10,200 feet, but before long I was above tree line (11,200 feet) and I had sweeping views of the mountains all around me. 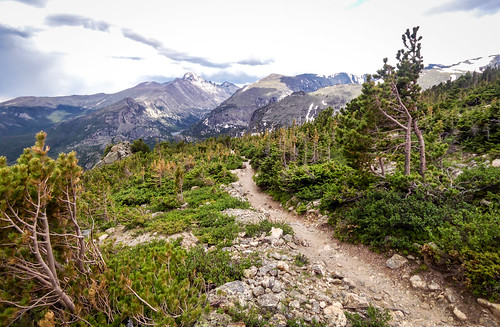 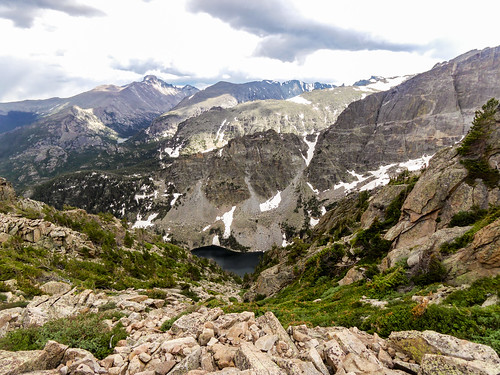 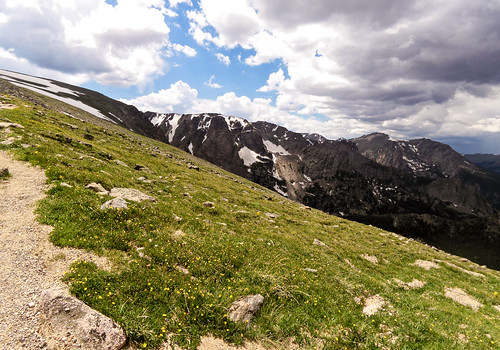 About that time I heard thunder. I turned around and saw this. 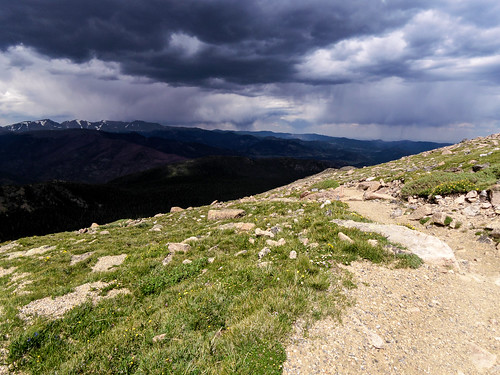 Not a good sign. The clouds appeared to be moving away from me, and I was almost to the top where it was still bright and sunny. So I forged on. I slogged through a small snowfield. 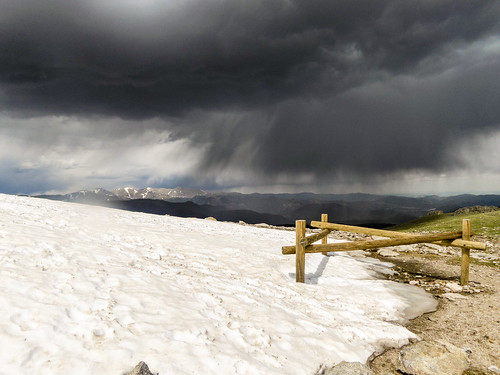 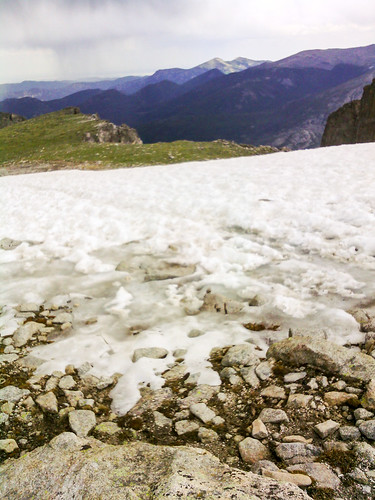 And finally I reached the top (12,324 feet). Given the name of the mountain I shouldn’t have been surprised the actual summit was not terribly interesting in and of itself. 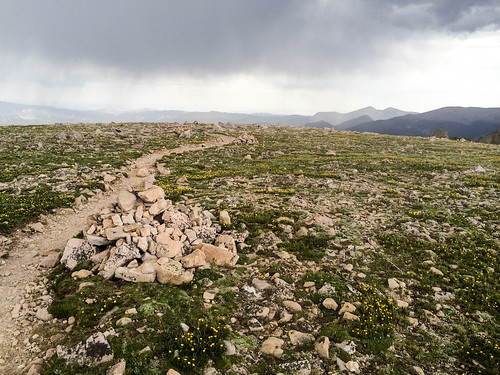 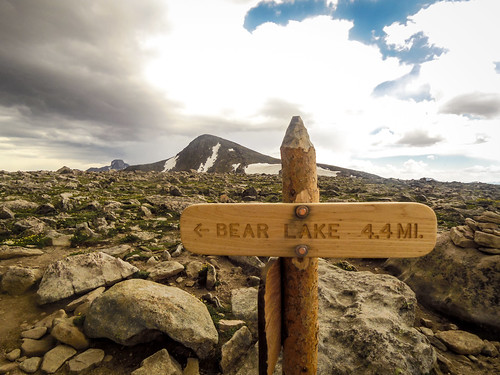 This was the first time I’ve run up to and along the continental divide. I had hoped to run further out along the flats up there at 12,000 feet, but the weather was actually getting closer to me. So I started hauling ass down the mountain. Within minutes I was being pelted with hail. 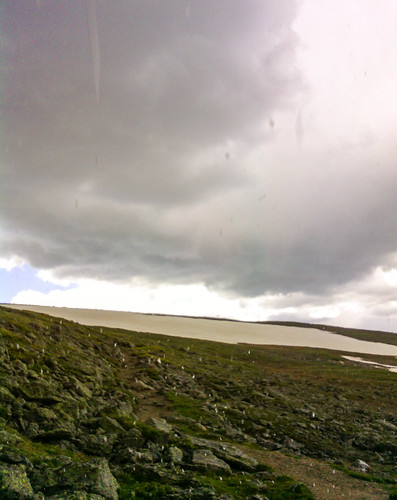 At first it just stung a little bit, but the pellets grew larger and seemed to be coming faster and thicker. I was wearing a visor and the top of my head was really hurting by this point. I took my jacket out of my pack and sheltered my head as I began walking. Now my hands and elbows were taking the brunt of the impact, which didn’t feel great, but at least it wasn’t my skull. After several painful minutes the hail eventually subsided and I could run again without covering my head. I made good time. Soon enough the sun came back out.

The lower trails were muddy from all the rainfall during that popup storm, so the rest of the descent didn’t go quite as quickly as I expected. Eventually I made it back to my car in the now nearly empty parking lot and began the drive home. 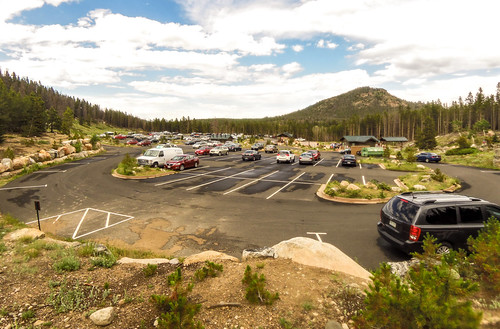 It was quite an adventure. Surely it would have been better without the storm. At least I was somewhat prepared, with extra gear to handle the weather, plenty of food and water, and a GPS beacon in case of emergency. Since these storms are much more common in the afternoons I should probably plan future adventures for mornings instead.