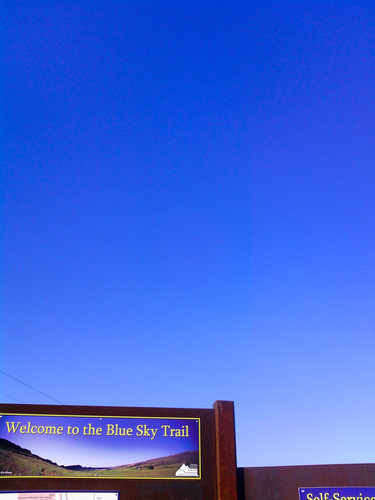 I first ran the Blue Sky Trail about 2 weeks after we moved to Fort Collins. It was pretty awesome, if for no other reason than it was so dramatically different from the midwestern trails I’d been running for the previous 20 years. Midwest trails are dirt paths through forests, mostly flat with perhaps a few short steep hills. Blue Sky runs the length of a grand, wide open valley as the foothills transition into the Rocky Mountains. The trail is somewhat rocky, and over the course of 9 or so miles (one way) there is exactly one tree to provide shade. 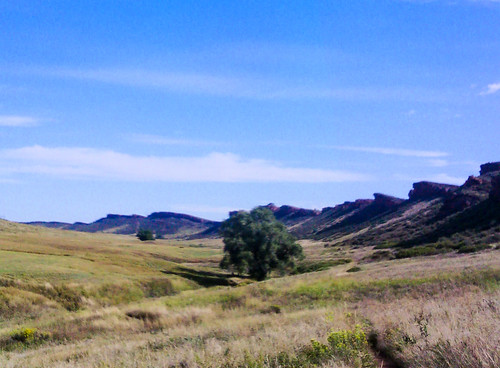 I’d been looking forward to this race for a long, long time. I had just come off a really good run at the Black Squirrel Half Marathon in September. I felt really fit. I knew every inch of the course. I had run the entire 27 miles as a training run three weeks prior, plus shorter sections on several other occasions. When I didn’t run it I rode my bike on it.

The weather was very promising, 40’s at the start, 60’s at the end. The last 18 miles of the course are completely unshaded, so if it had been a hot day the run could have been a lot more difficult. 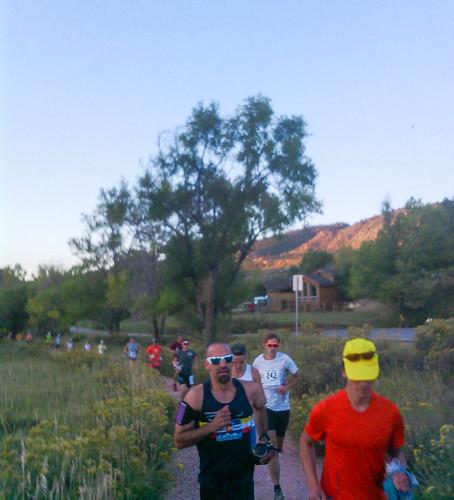 The start is pretty narrow (wide enough for 4 people standing or 2 people running) so I lined up near the front. After some initially jockeying I settled into about 10th place and I was running comfortably.

The early miles of the race take place on the trails of Horsetooth Mountain Open Space, and after just 2 miles we began to ascend the infamous Towers Trail climb. After easing into it the trail climbs almost 700 ft in the steepest mile. I’ve run this trail a lot. It’s ridiculously steep in places, and just plain tough. I was a bit relieved to see even the leaders were walking on the steepest sections. I can run all the way to the top when that’s all I’m doing, but when there’s 20+ miles afterward, I decided walking would be just fine. I moved up a few places and back not quite as many. 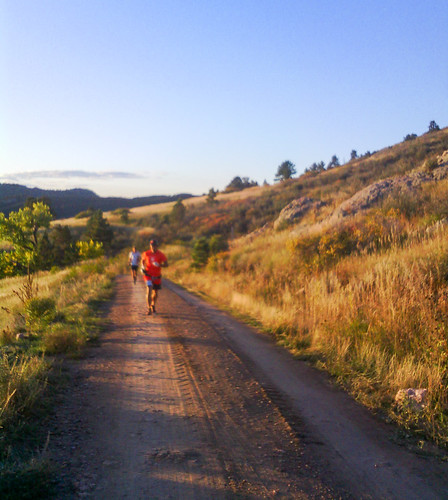 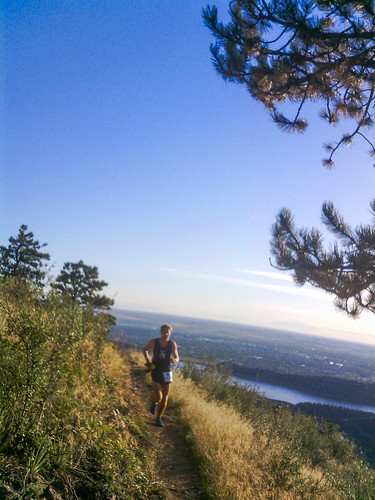 I was in a pack of 4 runners when we reached the high point of the course and turned around for the steep descent. I began to have problems with side stitches on the descent, which has been all too common for me since moving to Colorado. I don’t know what’s going on with that. Fortunately, I knew they would go away once the trail leveled out at the bottom of the mountain. That was the one and only big climb of the race. There were a couple more medium hills and lots of small rollers to come. 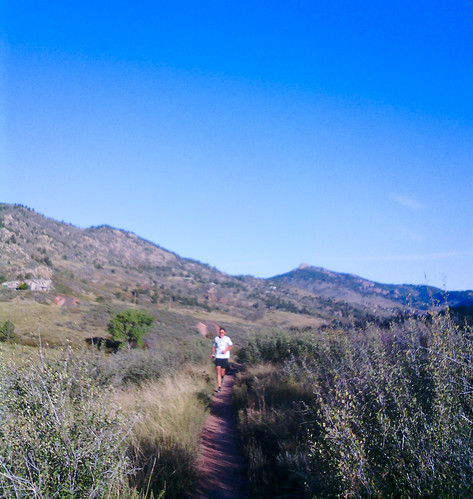 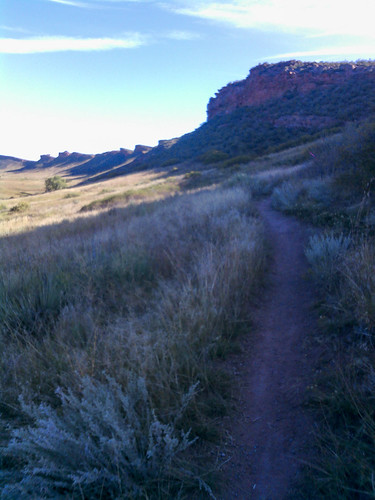 I sped up and settled into a rhythm once we reached the Blue Sky Trail proper. Over the next 4 miles I gradually reeled in the runner who was in 5th place, and I finally made the pass going up the Indian Summer climb. Sadly this would be the high point of my race. That climb felt tougher than it should have. I ran it in the same time as I had done on a few of my (much slower) training runs. More side stitches on the descent. I slowed and a runner passed me. I would have settled for 6th place. 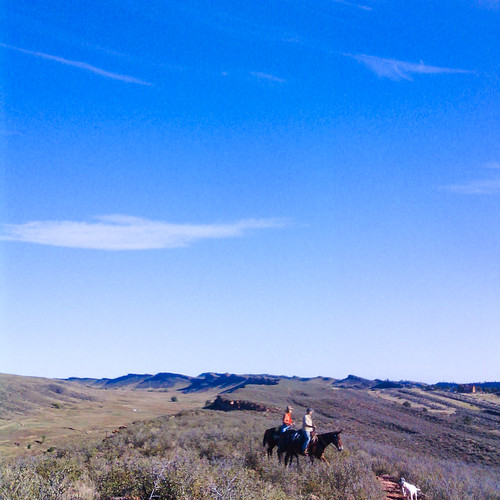 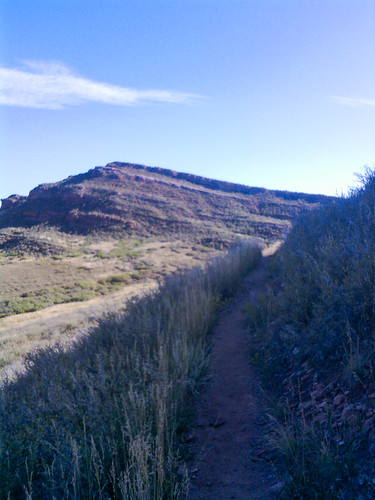 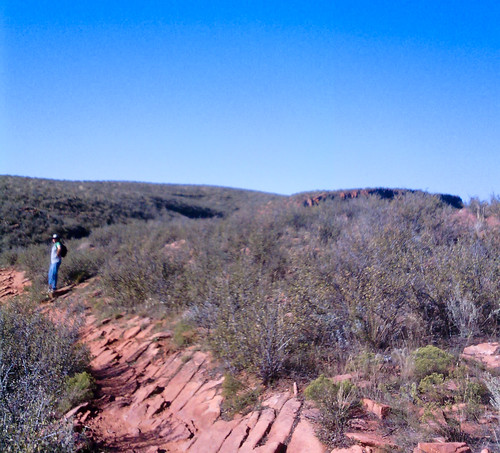 Approaching the Blue Sky turnaround came the nastiest, rockiest, most technical part of the course. I slowed even more. On the way back on the Blue Sky out-and-back I got passed, passed, and passed some more. My legs were completely sapped of energy. I could move reasonably well on the flatter sections, but every uphill I was reduced to a walk. I was now moving significantly slower than I did on my easy training runs. 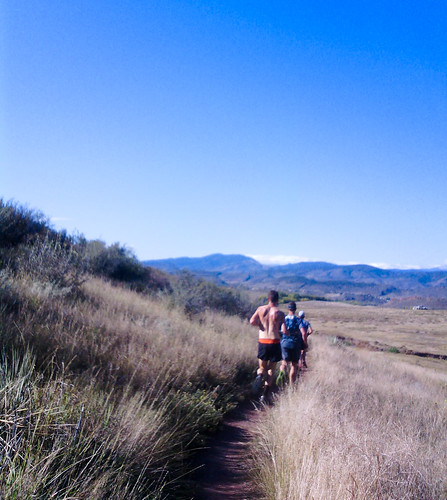 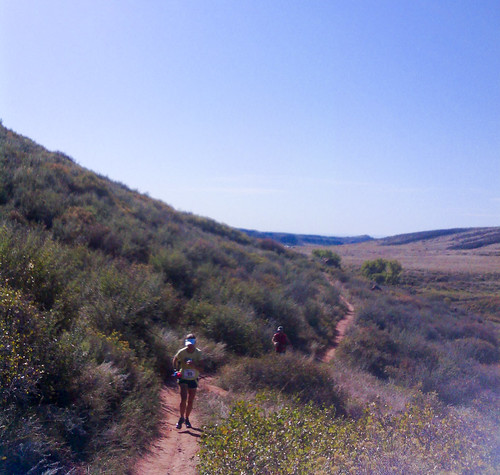 The final 6 miles were pretty brutal. I struggled with fatigue, hunger, nausea, heat, and dehydration. I was the 13th person to cross the finish line (10th male) after running for 4:01:58. I can’t say it was a terrible race, because the first 2/3 were actually pretty good. But the last part of the race was pretty terrible, making the race as a whole just okay. My performance was nowhere near as bad as the Mt. Werner 50K, but that’s not really saying much. 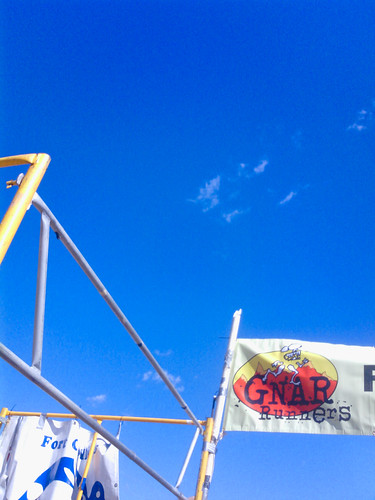 I didn’t quite race up to my expectations. I was pretty bummed out about my performance for a few days, but after a week or so to put it into perspective it really wasn’t that bad. I could have done better, and next year I will do better. I’m hungry.