What a day. First we headed over to the Freedom 5K at the Assembly Hall. This race is huge and neither of us had ever done it before. Since we ran over there we didn’t have any place to put our race t-shirts, so we stuck them in a bush and picked them up after the race. It started at 11 am, rather late for a summer running event. The temperature was much cooler than usual for this race (though it was still hot for running, in my opinion) so there was a rather large turnout (by far the largest I’ve seen for a Champaign-Urbana race).

I started out a little fast, but not ridiculous. We ran down the fresh asphalt of Kirby/Florida before turning north on Lincoln. There were lots of spectators on Lincoln. They weren’t necessarily there to see the race, but rather to reserve the best locations to watch the 4th of July parade that would be starting in a couple hours. Almost two miles into the race we passed a popcorn stand, the smell of which kind of made me want to hork. By the time we turned back onto Florida and crossed over into Champaign again the smell of the fresh asphalt was really getting to me. This was the third mile of a 5k and my heart rate hit 193 (the highest it’s been in years). Fortunately, the end was in site.

I finished in 17:46. In most other area races this would be good enough for a placing somewhere in the 3-5 range, but in this huge race (with lots of good high school aged competitors) it was good enough for 23rd. I’m a little skeptical the race was actually 5k. A couple mile markers were definitely in the wrong place and my GPS indicated the course might be a little short.

Melissa had a good run as well, finishing in her fastest time ever for a 5k. I stuck around for a while after the race to pick up medals for both us, each placing 3rd in our respective age groups. Unfortunately, I passed most of the time waiting for the awards ceremony by standing in the sun and now I have a painful tank-top shaped sunburn on my back and shoulders to show for it. 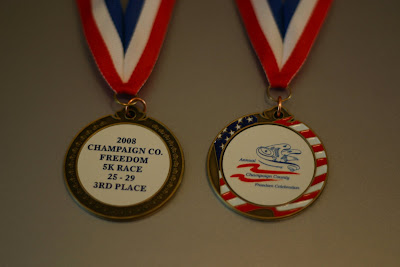 Our medals. Getting the same place in the same age group (male & female), they are identical.

After the race we ran home, showered, ate, then hopped on Big Red to ride the couple blocks over to the parade. Champaign County Bikes was again part of the parade so we found the other bicyclists and joined them riding in the parade. We covered the 2 mile route at very slow speed, seeing lots of friendly faces (including a few we recognized) along the way. 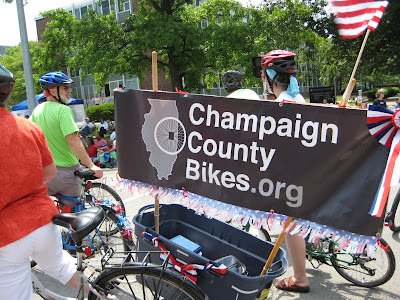 Our tandem (Big Red) was one of the crowd favorites, but there were a few other neat bikes which the crowd liked even better. In particular, the tandem-recumbent-one-rider-rides-backwards bike and the custom-welded-double-tall bike received the lion’s share of attention. It was a good time.

After the parade we walked a few houses down the street to a neighborhood block party/cookout. Our neighbors are all very friendly, and generally much older than us. It was kind of funny when one of them mentioned how nice it was to have people under age 50 at the party. Again, a good time was had by all.

Finally, we got Big Red back out and headed over to Parkland to watch the fireworks. They used to be held within walking distance at Memorial Stadium, but since the stadium is under construction they moved them across town to Parkland. It was a long haul, but the roads were relatively traffic free (I think most people arrived early). 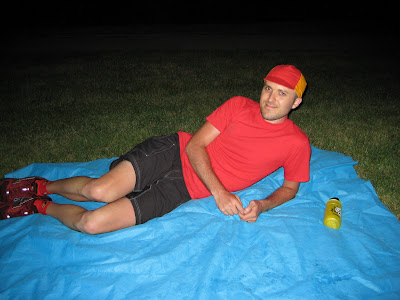 The fireworks were pretty good. We sat on a little blanket in the grass. Afterward we had a long ride home. We avoided most of the traffic by sticking to side streets. We arrived home late. It was a long, exhausting, fun day. It’s a good thing we got to sleep in until 5 am this morning.

One thought on “The 4th of July”