Ever since successfully talking me into the Mattoon Beach triathlon two weeks ago, my friend Martin has been trying to talk me into doing the Evergreen triathlon today. I was on the fence about it. The Evergreen tri is an Olympic distance race, which is about twice as long as the two sprint triathlons I have done this summer. An Olympic distance triathlon consists of a 1500 meter swim (that’s almost a mile), a 40 km (25 mile) bike, and a 10 km (6.2 mile) run. I was not worried about the running and biking, but the swim was going to be a challenge. Up until this past Thursday, the longest I had swum non-stop this summer was 800 yards (i.e. less than half the race distance).

Unfortunately, Martin was one of the many people who was involved in the nasty crash last Wednesday. He had already registered for the race, but was now unable to compete in it (doctor’s orders). On Thursday he kindly offered to transfer his registration to me. I accepted.

Next, I needed to prove to myself that I could actually swim 1500 meters. I have been swimming on Thursday afternoons most of the summer so that day I did a long swim, and ended up going 1760 yards (one mile) nonstop. That evening I took a spin on my triathlon bike, which I hadn’t used in almost two weeks. It checked out okay. I was as ready as I was going to be with two days preparation.

I packed the car last night. We woke up at 4:20 am, packed a few remaining items, and headed over to Bloomington. We encountered heavy rain on the way. Crap. I really should have checked the weather. The race was to start at 7:00 am. Registration was fairly smooth, despite having to explain the registration transfer situation. 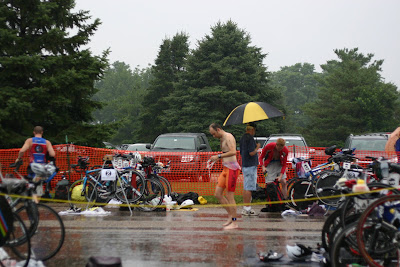 I always intend to arrive plenty early to triathlons so I don’t have to rush my preparation, but for some reason this summer it just hasn’t worked. Today was no exception. The prerace meeting was underway while I was preparing my transition area. I still needed to pick up my timing chip, get my race number marked on my arms & legs, and get my swim cap I gave to Melissa for some reason. This was about 10 minutes before the race started. It was raining the whole time. This was one of the most stressful race preparations I’ve had, second only behind the half Ironman in 2003 where I got a flat tire warming up on the bike about 20 minutes before the race start. Somehow it worked out this morning. I got myself to the starting line, and before I knew it we were off. 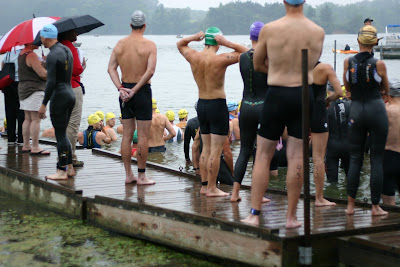 Rob lined up at the start of the swim

The swim was loooong, as expected. I had a hard time seeing the course markers so I had to trust other people to know where they were going. Shortly before the halfway point the first person from the wave after me (started three minutes later) passed me. A moment later I passed the last people from the wave before me (started three minutes earlier). That indicated I was probably doing about average. 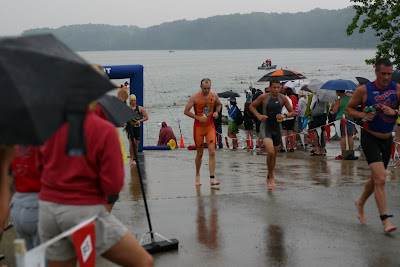 Rob exiting the water after a 28 minute 1500 meter swim

The transition area was fairly long and was littered with small rocks on the asphalt. Running on rocks doesn’t feel good with bare feet. 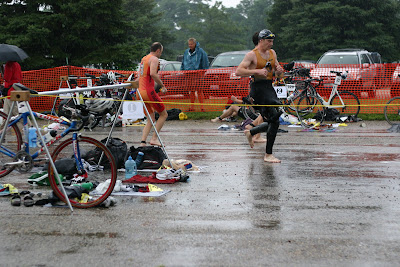 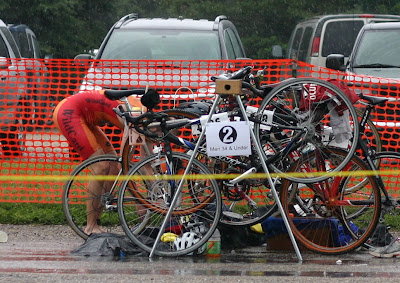 Rob in the wet (and somewhat gravely) transition area 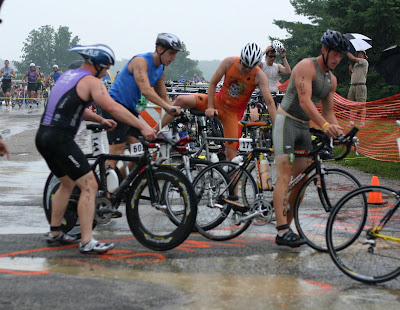 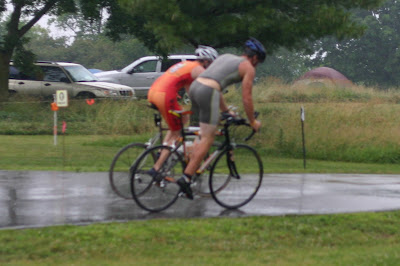 I got off to a good start on the 40k (25 mile) bike leg. I passed several people fairly quickly. A few people passed me, but not nearly as many as I was passing. I could tell I was having a good day. There was a light headwind and steady rain. There weren’t very many corners, but I navigated them all safely. I reached the half way point still feeling fresh. There was a bit of a tailwind on the way back and I was really able to ramp up the speed (over 30 mph at times). I ended the bike leg with the same average speed as the Indianapolis triathlon series June race, and this bike leg was 2.5 times as long. I felt great the entire time. This really was one of my best bike rides in a triathlon. 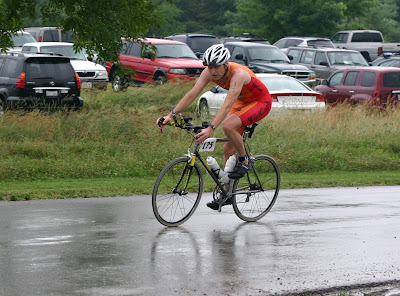 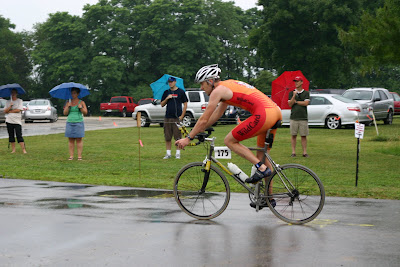 Rob finishing the bike after averaging 22.1 mph for 25 miles 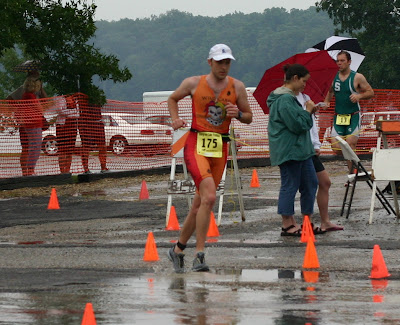 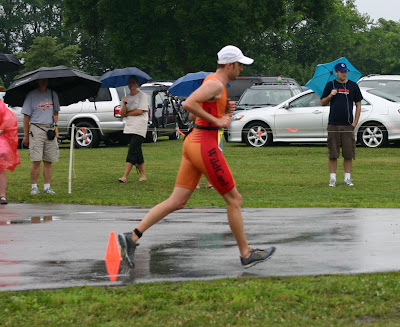 The 10k (6.2 mile) run started out pretty well. My first three miles were all around 6:40-6:45. I could tell I was getting a little dehydrated. They had ample water stations out on the course, but I find it really difficult to drink when running that fast. I bit the bullet and grabbed a cup at 3.5 miles. My fourth mile was a few seconds slower, but I was still feeling okay. There was a turnaround after 4 miles and for the first time in the run we faced a headwind. The wind, combined with slight dehydration, combined with general fatigue from 2 hours of hard racing really made the last 2 miles difficult. Fortunately, the struggle lasted less than 15 minutes and I crossed the line in 2:20:56, after averaging 6:55 miles for the run. I would have liked to run a little faster, but I’m content.

My only previous attempt at this exact same distance was in August 2002, where I had a pretty good race and ended up in 2:27:46. I’ll take a 7 minute PR any day. Looking back at my splits from that race, my swim was almost 3 minutes slower today, while my bike and run were both several minutes faster. In those days I was swimming 3000 meters 4 days a week. This summer I’ve been swimming 1000-1400 yards 2 days a week. So the slower swim was no real surprise.

After standing out in the rain for 2.5 hours Melissa’s teeth were chattering and her lips were blue so she went back to the car to try to warm up. I packed up my (by this time soaking wet) gear and headed back to the car. I did manage to find a dry tank top and pair of shorts I left in the car. Melissa had only my race t-shirt to put on.

I hadn’t been expecting an age group award because this was a longer race with tougher competition. I did have a good race though, so I decided to go check the results to see if I would get an award. The preliminary results had been posted and I finished 5th in the 30-34 age group. Some races only do age group awards to the top 3, others to the top 5, others go even deeper. I checked the race information packet which I had printed out (but not read) and it indicated they would give awards to the top 5. Then came the surprise of the day. Since this was the Regional Championship race for the Olympic distance, my top 5 age group finish qualified me for the National championship race in September. Not bad for an unplanned race.

Great, so I get an award. Crap, Melissa is cold, wet, tired, & hungry. She graciously agreed to wait for the award. The award was a cowbell, which was unique and interesting. It was particularly ironic that Melissa just purchased a cowbell a week ago for my bike race. They also handed out nice embroidered jackets to everyone who qualified for the national championships. Score. 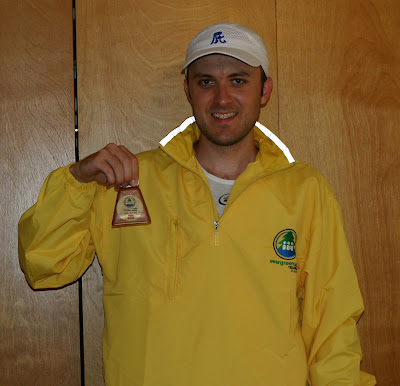 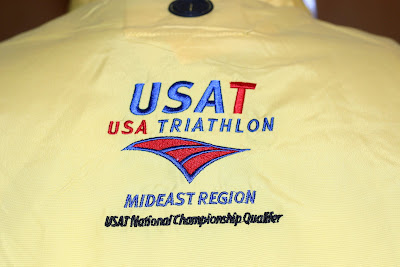 12 thoughts on “The Qualifier”