My body still on Central Daylight Time, I woke up early last Sunday morning in Portland. My flight back to Champaign (by way of Chicago O’Hare) didn’t leave until 1 p.m. so I had a few hours to do some touristy things. My first thought was to check out downtown Portland. I found some brochures in the hotel lobby, but unfortunately most places opened late on Sundays. Instead I packed up and checked out of the hotel at 7:30 am not really knowing what was going to come next. Sometimes this makes for great adventure, and other times it’s a big let down.

At first I did head to downtown Portland just to look around a little. I got caught up in quite a lot of traffic, both auto and pedestrian. I quickly realized everyone was headed to the Portland Race for the Cure. I pressed on a few blocks when I started thinking to myself, I should run the race. I was a little bit tired from the previous day’s triathlon, but it was only a 5K run and I can do that in my sleep (I think I actually did do that in my sleep a few times during college when we had 6:30 am practices). Then came the minutia of finding a place to park, finding the race start, dealing with registration (if it was even possible on race day), changing clothes, flying home sweaty and gross, etc. I quickly lost interest.

My next plan was to head out east of town on I-84 to the Columbia River Gorge and maybe Mt. Hood. It was drizzly and foggy all morning, so I never did see Mt. Hood. The river was nice though. The trip got interesting once I turned off the interstate onto a “scenic highway.” 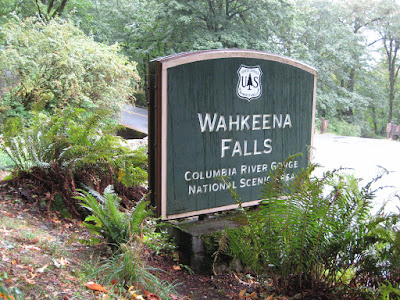 I came to a waterfall along the side of the road and decided to go take a look at it. I didn’t really take anything with me other than my camera, because I thought I would get right back into the car. Then I realized there was a short trail up to the base of the waterfall. 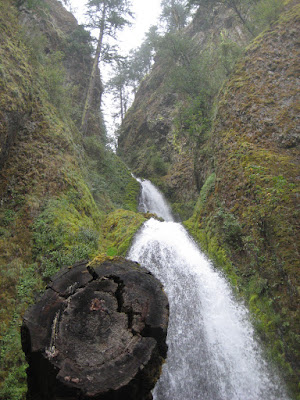 Once I got there I realized there was another trail to the top of the waterfall. 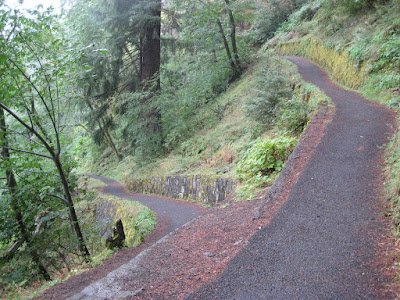 There were 11 switchbacks on the way to the top 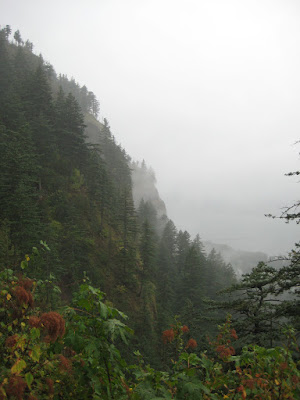 The view near the top of Wahkeena Falls

Once I got there I realized the trail kept going and going. 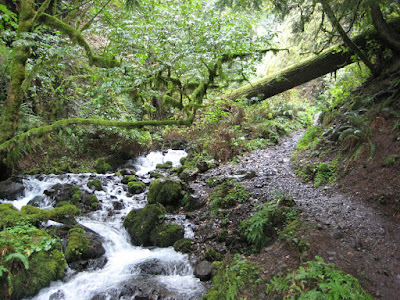 I hiked about 1.5 miles uphill before turning around and hiking another 1.5 miles back down to my car. The forest was very beautiful. 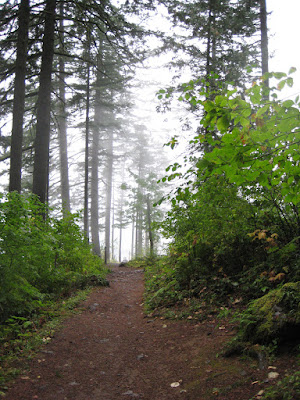 Thinking my adventure was probably done for the day I continued down the scenic highway just a scant half mile before coming across another waterfall and accompanying trail system. This waterfall was even more impressive (and correspondingly more touristy) than the first. 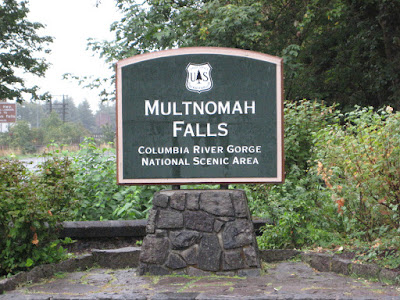 Multnomah Falls actually reminded me quite a lot of the waterfall in San Ramon on Ometepe island in Nicaragua. 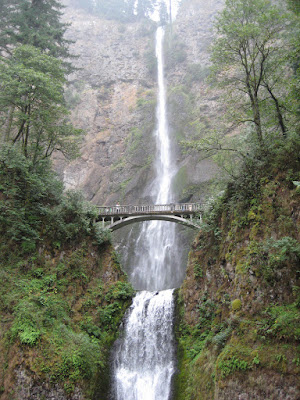 Multnomah Falls is the second highest waterfall in the U.S.

Again I hiked up to the base of the waterfall for a closer view. Again I continued on to the top. There were a number of unprepared tourists hiking the “1 mile” trail up to the top, quite a few of whom I passed on the way up but not on the way down (i.e. they turned around). Hiking 1 mile isn’t very challenging. Hiking 1 mile that gains 600 ft of elevation is. 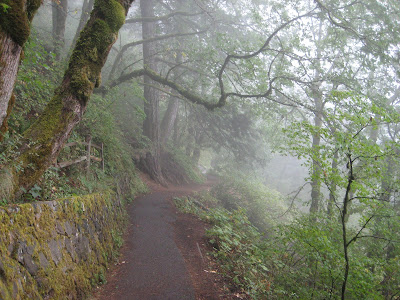 By this point I was running short on time so I was really moving up the hill. My legs weren’t really sore from the previous day’s triathlon, but the next day my legs would be quite sore from this hike. 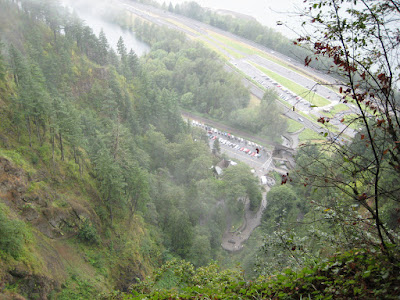 The view from the top was spectacular. There was a little platform that went right out over the water and you could watch it falling off the cliff.

On the way out I noticed several other tourists at the falls wearing their USA Triathlon Age Group National Championship finisher’s jacket, just as I was. We smiled, nodded, and continued on our way.

I made my way back towards Portland. Along the way I stopped for a veggie burger at Burger King. My bike was still assembled so I packed it up into the suitcase in the BK parking lot. I arrived at the airport 90 minutes before my departure to find half of the airport wearing the race finisher’s jacket. What an adventure.

One thought on “The Falls”