Ralphie: Oooh fuuudge!
Ralphie as adult: Only I didn’t say “fudge.” I said THE word, the big one, the queen-mother of dirty words, the “F-dash-dash-dash” word.

On Saturday I competed in the Charleston Challenge Duathlon. The race wasn’t very big, less than 100 participants. The distances (2 mile run, 19.2 mile bike, 2 mile run) suited me fairly well, and I was still near peak fitness from the triathlon national championship race so I liked my chances for success. On the other hand, I heard mixed reviews about this race from friends who have done it in the past. There are half a zillion turns on the bike course and (from what I heard) they are not always marked very well. I know two different people who missed turns on the bike course. One lost a little bit of time, the other lost enough time that he simply abandoned the race.

Charleston, IL is only about an hour away so I didn’t have to wake up unbearably early. I arrived at the race venue (an elementary school) with plenty of time to prepare. First they had a children’s race (actually three separate races based on age). They ran a lap around the circle drive, the bicycled around the school. It was entertaining. A number of the children still had training wheels on their bikes.

Next was the grownups race. I warmed up a little on the bike, trying to keep my eyes peeled for the orangish markings on the road that denoted the turns. I think I can handle this. I re-racked my bike and went for a short run. I needed to get used to running fast because I wasn’t going to have any time to warm up during a race this short. 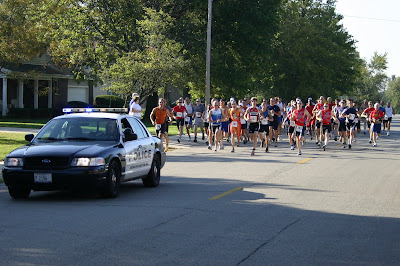 The race began. I started at the front and went out with the leaders for the first half mile or so. At that point two guys started to pull away. I was in third place. I decided to let them go and keep my pace under control. The course was not marked and I wasn’t wearing my GPS, so I had no idea how fast I was going. Sometimes the adrenaline rush at the beginning of the race can mask the sensations you normally use to feel your pace.

My senior year in high school at the conference track meet I ran the first 400 m of the 3200 m run in 62 seconds. I had a 10 second lead on the rest of the pack at the end of that first lap. The rest of the race didn’t go so well. I somehow hung on to finish second place, but I really should have won. I learned a valuable lesson that day about starting too fast. 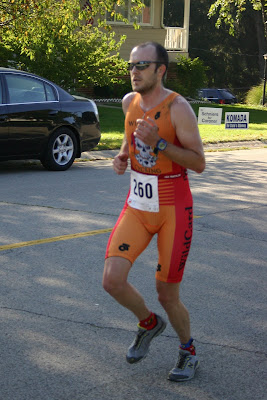 Anyway, I maintained my position the rest of the first run leg. By the end I let the two leaders gain 15-20 seconds on me. The next runners were another 10-15 seconds behind me. I entered the transition area and glanced at my watch, astonished to read 11:08. If the course was accurate I had just run my fastest two miles in 10 years.

I had a quick transition and began the bike a little winded, but feeling good. The road curved through a neighborhood before approaching a stop sign. I lost sight of the leaders through these curves. I race volunteer was standing at the intersection pointing to my left. Hmm. I didn’t see any markings on the road indicating this was a turn… I wonder why he is pointing. I looked to my left and saw a pickup truck (who had the legal right of way) coming to a stop. Oh, good. The volunteer was just alerting me to the presence of the truck. Now that the truck is stopped I can continue through the stop sign. The volunteer stared at me as I passed, though he didn’t say a word.

As I rode the next couple blocks I began to second guess myself. The road got narrow. I still couldn’t see the leaders. Did I just make a wrong turn? I looked back behind me and saw a steady stream of cyclists turning left at that intersection.

I slammed on the brakes and turned around as fast as I could. As I reentered the course the same volunteer again stared at me, and again didn’t say a word. I was mad. Furious. On the plus side I unleashed that anger on my pedals and rode the next few miles like a man possessed. I quickly passed a slew of riders, nearly everyone who had passed me while I was off the course. I saw one more rider off in the distance and I chased him for miles, over half of the course. We were going almost the exact same speed and I wasn’t gaining much. The course turned. We went uphill, downhill, uphill, downhill.

About halfway through the bike I could tell he started to slow down and I regained a little motivation as I slowly reeled him in. I made the pass convincingly, but then slowed down a bit. He passed me back on the next downhill. I passed him back on the next uphill. He stayed just a few seconds behind me the rest of the ride. I couldn’t see anyone else in front of me and I was beginning to wonder whether I was leading the race. Could it be so?

I finished the bike leg in 53:48, averaging 21.4 mph. I should have ridden faster, even with all the hills, but the numerous turns made it really difficult to maintain a high speed. I reached the second transition with the other guy hot on my heels. I overheard a friend of his tell him he was in 4th place. Crap. I never caught back up with the two leaders. Oh well. 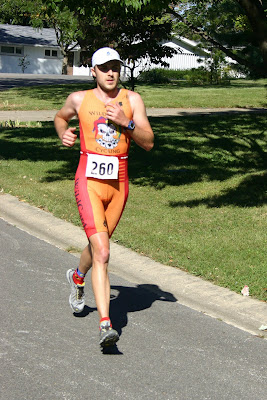 I pulled away from the guy on the run and finished a couple minutes ahead. My second run split was 12:22. My finishing time was 1:18:25, good enough for third place overall.

From studying the results I estimate I lost about 45 seconds from the wrong turn. A shame indeed, but the second place finisher was far enough ahead that it wouldn’t have made any difference. So I let it be. I was also second place in my age group, for which I won a major award (er, a large trophy). Frankly, I’m kind of glad I didn’t pick up the 1st place trophy… it was way too big.

3 thoughts on “The Wrong Turn”