The Trifesta Sprint Triathlon was last Saturday at John Logan College near Carbondale, IL. Coming off a good sprint triathlon the week prior I had high hopes for this one. The distances were roughly the same, but I had a little more time to prepare.

My first order of business was to deal with the nagging problem that both pairs of shoes I wear during triathlons were literally falling apart. My bike shoes are 12 years old and the shoes I run in are almost 5 years old. A few days before the race I upgraded both sets of shoes to shiny new pairs. I did the minimal amount of due diligence by testing them each out once before the race. No real problems. 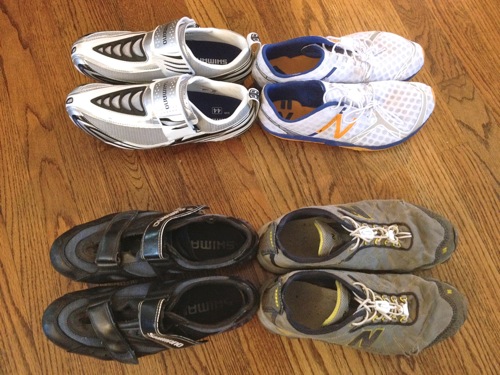 Between the longer drive, my internal alarm clock, and my desire not to repeat last week’s late arrival I left super early and I was by far the first person to arrive at the race. I took my time and prepared all my gear. I warmed up running & biking without incident. I grabbed my goggles to go warm up swimming and noticed they were in two pieces. My first minor problem of the day was fairly straightforward to rectify. I was able to reassemble the goggles into working order. Crisis averted.

Unlike last week’s open water swim, this race had a pool swim. Each competitor estimated their 400 yard swim time and we lined up from fastest to slowest. My 6:00 estimate put me about 12th in line. The swim went reasonably well. The guy behind me caught up to me a couple lengths from the end, just as I was catching up to the guy in front of me. I made room for him to pass on the last length and we came out of the water together, my split being 5:48.

My first transition was good (I passed several people in the transition area), and I was quickly out on the bike. I passed a couple more right away. We started with a bit of a tailwind and my speed was high. About 3 miles in a guy blew past me on the bike. I tried to increase my speed to stay within reach of him, but it was hopeless. I rode the two fastest miles of the race at 27 mph and this guy kept pulling away. I slowed down a bit, though I still caught and passed a few more people. It was clear I wouldn’t be the overall winner, but I was doing quite well. Things got tougher on the way back into the headwind. Furthermore the roads were a bit congested with automobile traffic. The roads were in good shape, but the course took us through 3 small towns, which seemed a bit unusual for this sort of event.

About 2/3 of the way through the bike I noticed a problem with my (new) shoes. The velcro straps were a bit too long and they kept rubbing up against the cranks. The flapped up and down with every pedal stroke. It probably didn’t cause any delays, but it was hugely distracting, and not at all what I needed at that point. So my second minor problem the day I just had to deal with for the remainder of the 14 mile bike leg. I ended up averaging 23.5 mph, which was a wee bit faster than last week for a slightly longer, more difficult (on account of the rolling hills) course.

My second transition was good and I started the run fast to catch up with a few racers right ahead of me. At the first aid station 1 mile into the run I accidentally snorted some water up my nose. As soon as I got that under control and I could breathe again my shoelace came untied. Sigh. I was running fast enough that I really didn’t want to sacrifice the 10 seconds or so it would take to retie them so I ran the last two miles like that. I wasn’t in any danger of tripping, but they did slap my leg with every step.

The second mile was mostly shaded, which was welcome in the 85˚F heat. I made the most of it to speed up a bit and try to catch up with a guy way in front of me. I came within 20 meters or so, but I couldn’t close the gap before the finish. I averaged 5:57 pace for the run, which was about a minute faster than last week, though on a slightly easier course.

So the race was over, but due to the staggered start it would be quite some time before I actually learned how I placed. When I finally did see the results I was quite pleased. I finished 4th overall, 1st in my age group, and each of my swim, bike, and run were faster than last week for comparable distances. So it was a great race for me, in spite of the shoe, shoe, and goggle problems. 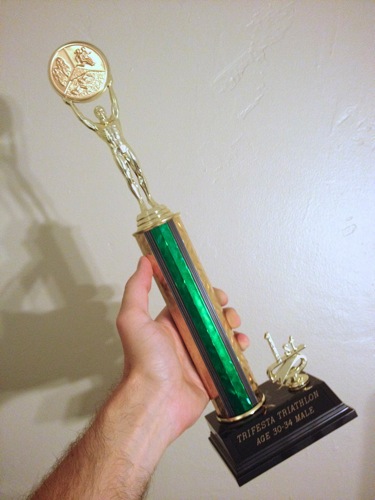