A little over a week ago I raced the Veldrijden Columbia cyclocross race. My friend and teammate, Mark, did an excellent job organizing the event. I was in the Cat 4 (newb) race. Warming up before the start I got a pretty good idea what was in store for me… I was out of breath and I had to get off my bike to walk up a hill that was so muddy my tires just spun and I started to slide backwards when I tried to ride up it.

A last minute bathroom trip left me at the back of the pack of 30 or so riders for the start. Which is exactly where I didn’t want to be. The start of a cyclocross race is so important to one’s chances of success. I took off like crazy, passing several people, to get up into 12th or so place by the first turn. Then there was a fast section where I moved up a few more places before we hit the challenging parts of the course.

I handled my bike well and I remained patient. I would seize any opening I could find to pass somebody and move up a bit. There was one guy way off the front and nobody had a chance of catching up to him. By about halfway through the race, though, I had caught up with the chase group. My teammate Mike was in 2nd, some other guy was in 3rd, and I had moved up into 4th. It took a while, but I eventually passed the guy to move into 3rd. Then Mike and I opened up a bit of a gap. I passed Mike, he passed me back, then I passed him back. The longer the race went on the stronger I felt and the more I could see the other riders fading. 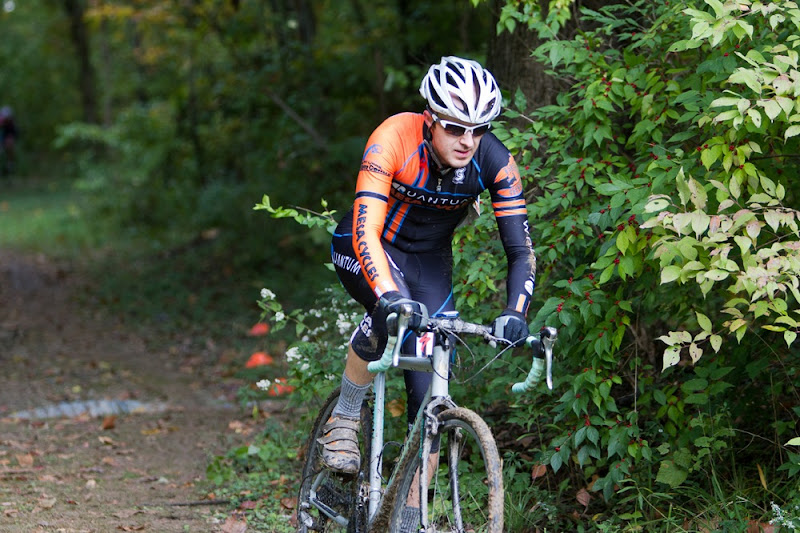 With one lap to go in the 35 minute race I was in 2nd place and I started to pull away from Mike a bit. I took a few unnecessary risks and got away with them. Then I blew it. On a fast, muddy downhill section I lost control of my front wheel and went down hard, smacking my (helmet-protected) head on the ground. I slid to a stop and quickly moved my bike out of the way so Mike didn’t go over top of me. My first reaction (as is the case any time I’ve crashed on a bike) was that I was seriously injured. My head was killing me. My next reaction was damn, I just crashed out of the race with half a lap to go when I was in 2nd place. After wallowing in self pity for a few moments it occurred to me that nobody besides Mike had passed me yet–I was still in 3rd place. I was still in podium position. Was I really injured? Could I actually get back on my bike and ride half a lap?

I decided to try, just as I saw two more guys coming down the hill. I jumped on my bike to get out in front of them only to discover my chain had fallen off. Crap. I pulled over to the side to let them pass as I put the chain back on, then I took off behind them, but I was unable to catch back up. I held on to finish 5th place. My head hurt, but I wasn’t injured. My body was fine. My bike was fine.

Looking on the bright side, I had a really good race. I moved up from a long way back up into 2nd place. I stayed strong throughout the whole race while other riders were slowing down. I have the fitness. I just need to learn to ride my bike.

One thought on “Blowing It”