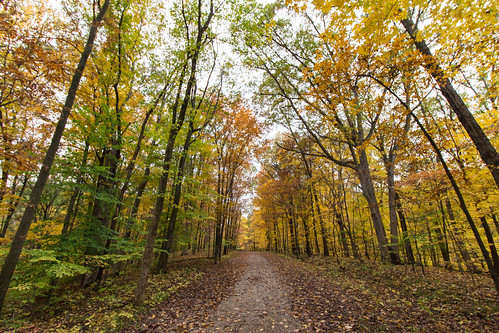 In a stroke of good luck, the Forest Glen 50K fell on the weekend before the Wolfram Technology Conference once again this year. Since I was going to make the trip to Illinois anyway, why not run a long race on one of my favorite trails? I am the defending champion, so I should probably play defense. 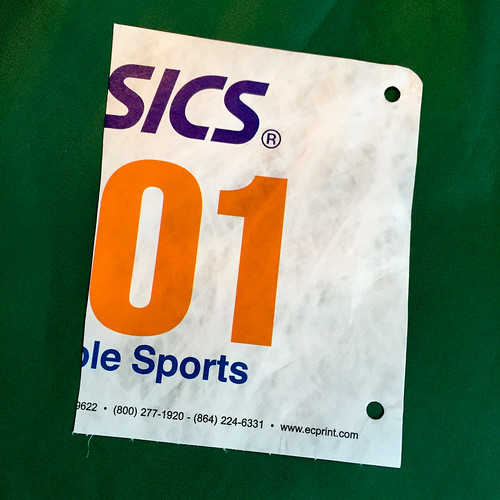 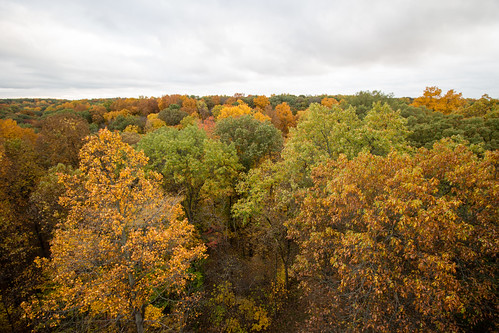 Race day had peak foliage. The trail was absolutely beautiful, perhaps the most spectacular I’ve ever seen it (the blurry race photos below don’t do it justice). The weather cooperated as well. Despite the long duration of the race, the temperature stayed a constant 50˚F the entire time, which (for me) is perfect running weather. It was overcast all day, and it started raining lightly toward the end.

While the weather was perfect, the trail itself has seen better days. A couple months ago there was massive flooding that damaged many parts of the trail, with several bridges being partially or completely destroyed. So there were some reroutes, some improvised bridges, a few extra stream crossings, and one super wonky bridge. The consensus seemed to be the course was running 5-10 minutes slower per loop (15-30 minutes slower for 50K). I could have my work cut out for me. 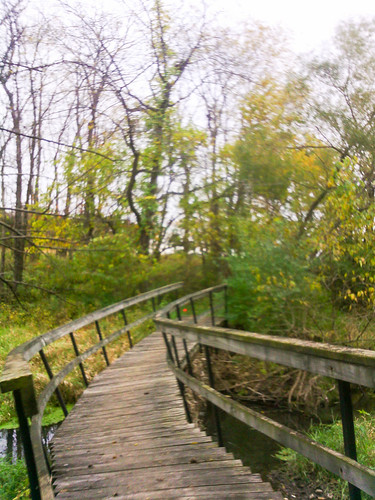 This bridge used to be straight and flat 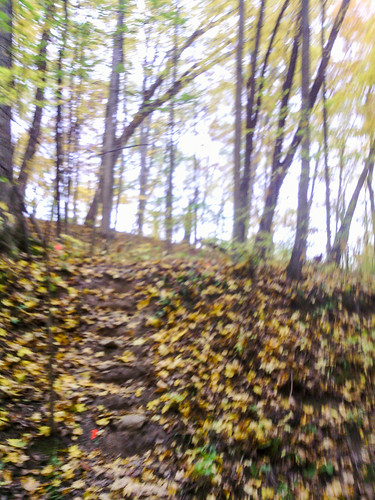 This is not a mountainous course with huge elevation gain, but it is deceptively difficult. With all the flat land in central Illinois, one could easily wonder how you could get 4000+ ft of elevation gain in 50 km around here. While no single hill on the course gains more than 100 ft, there are a lot of them. And since this trail goes up and down the ravines leading into the Vermillion River, most of the hills are rather steep.

I felt recovered from the Blue Sky Marathon two weeks prior. The big question mark on this race was what kind of difference (if any) would it make to race at (effectively) sea level after training the past five months in the thin air a mile above. Conventional wisdom says the difference should be noticeable. I was going to find out. 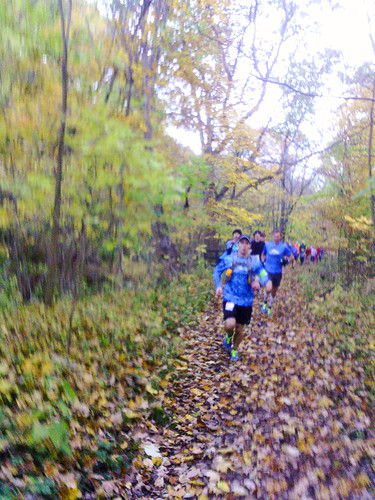 I planned to follow the next fastest person for a while, but as we started running nobody seemed to want to go around me. Fine, I’ll set the pace. The first mile barely felt like I was running. I didn’t look at my pace or time the entire race, but I was paying close attention to my heart rate early on. About a half mile in my heart rate was 111 (my max is around 190). I was in no danger of blowing up at that point, so I sped up. Soon I was all alone. I started the music on my waterproof iPod Shuffle. As I floated over the trail I drifted off into the zone as I heard the words I’ve so often heard at the beginning of a long race.

I’m alone above the atmosphere
and no one looking up can find me here
cause I can close my eyes and disappear.

On the easier parts of the trail I kept my heart rate around 144. On the steep uphill sections I let it spike up to 160 before holding that effort to the top, at which point it would drop again. This is easy, but then again it’s supposed to be easy at this point. The first lap was fairly uneventful. Once I reached the start/finish area after 10.3-ish miles I first saw my time, 1:32:XX. This was pretty close to what I ran last year, perhaps a minute faster. Perfect, let’s do that again. 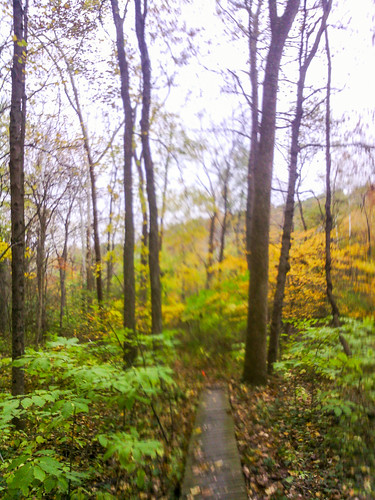 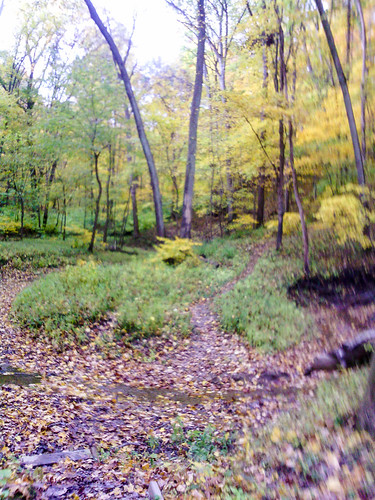 Due to cumulative fatigue, I knew I would have to raise my heart rate on the second lap to keep moving at the same speed. I ran closer to 150 beats/minute on the easy parts and I let it creep up to 165 on the frequent steep hills. I was definitely working harder, I just hoped I wasn’t also slowing down.

While the first lap was nearly perfect in every way, I was beginning to notice some issues on the second lap. My left hamstring/calf/knee was a bit tight (residual from yard work the previous weekend). My left ankle was a bit sore (I’ve been dealing with that one on and off for a few months). The pounding of the steep downhills left me with a sharp pain in my right knee. I’m a bit of wreck, actually. At least my right ankle is still… Shit, I just stepped in a hole and rolled my right ankle. That took a mile or so to work itself out. None of these issues were going to prevent me from finishing, but I was growing more and more concerned my performance might be headed for a cliff. 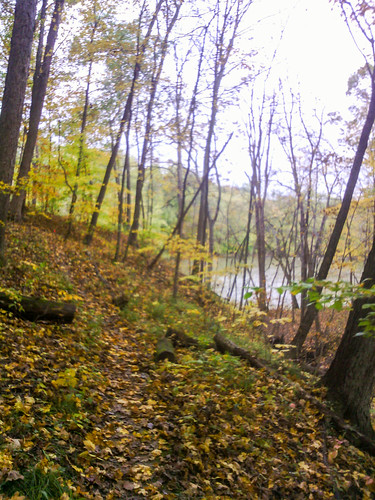 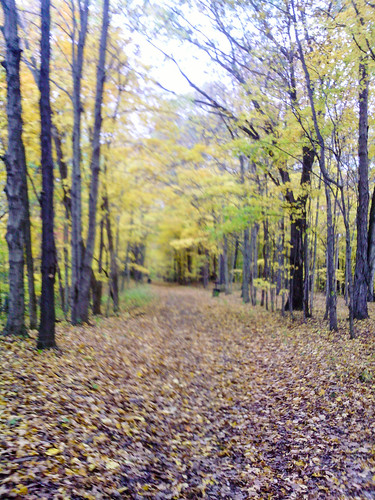 I was surprised and relieved to see the time clock read 3:04:XX when I finished my second lap. It was effectively the same time as the first (actually, 12 seconds faster). Any lingering doubt I had at that point went away. I knew I was going to be able to run a strong-ish third lap. Last year, after running two laps at roughly this pace I slowed down 2 minutes per mile on the third lap. I remember how I felt last year and I definitely felt better this time around. Sure, I was going to slow, but I wasn’t going to blow up. 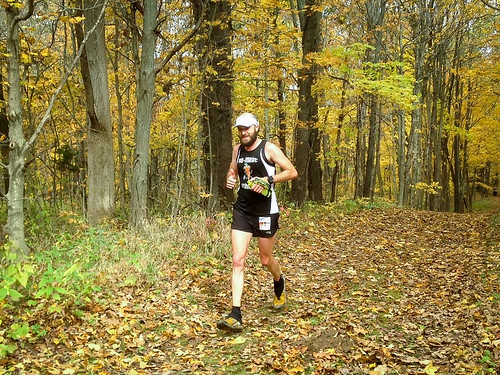 On the third lap I continued to run reasonably fast on the flats. Whenever I hit a steep uphill I slowed a bit more than previous laps, and it took me a bit longer to get back up to speed once I reached the top. I was no longer paying attention to my heart rate. It didn’t matter by that point, I wasn’t going to change anything I was doing based on what it said anyway. It was too late for that. I knew exactly how far I had left to run, how many hills were between me and the finish line, and how much I had left in the tank. 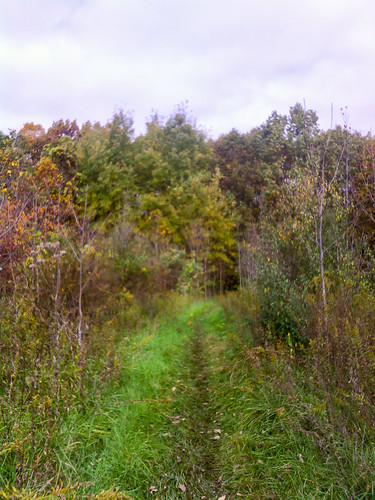 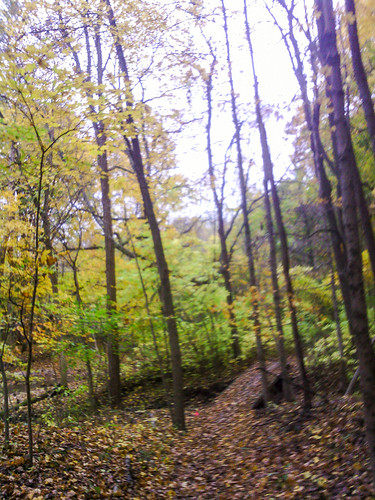 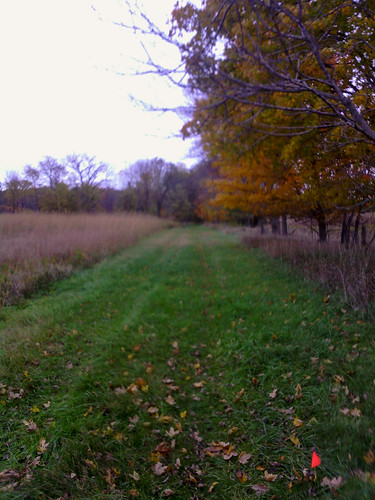 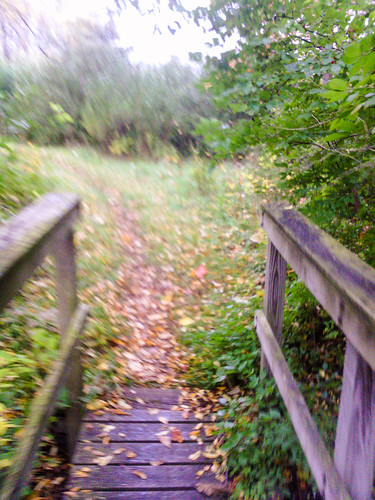 I finished in 4:47:35, a few minutes slower than I hoped. This meant I slowed down about 1 minute per mile on the last lap. I was working so much harder I kind of hoped I hadn’t slowed down that much, but I’ll take it. It was way better than last year. Since I had set the course record last year, this faster time became the new course record. So that’s something.

One notable thing about this race was I had absolutely no problems with my stomach (which is pretty rare for me lately). I drank ~60 ounces of water, ate 6 Hammer Gels, and took maybe 8 S!CAPS. My stomach never felt queasy, full, or sloshy. I was definitely hungry by the end, but I successfully held off the oncoming bonk.

Once I stopped running I had to deal with being cold and hungry. I ate a bunch of food, then I went inside and took a hot shower and changed into dry clothes. As the other finishers poured in we all sat around eating, drinking, and talking about running for several hours until all the finishers were done and we had the awards ceremony. Like last year, fine hand crafted pottery was awarded to everyone. It was an awesome way to finish out an awesome day on an awesome trail. 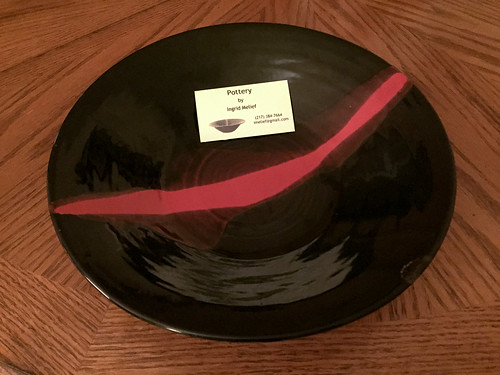 I can’t say enough good things about this race.