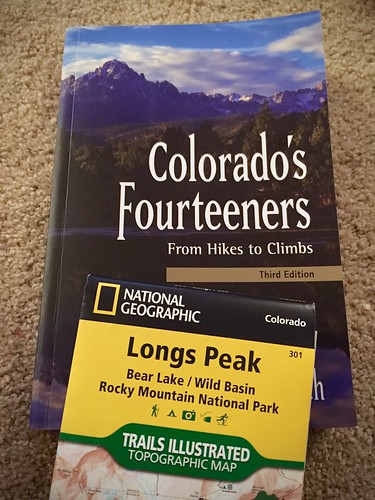 There’s only a short window of a few weeks each year when it’s (relatively) safe to climb Longs Peak without an ice axe (which I don’t have and don’t know how to use). Longs is the closest mountain over 14,000 ft to Fort Collins, in nearby Rocky Mountain National Park. It looms large over everything here. I can’t actually see it from my house because closer mountains obstruct the view. But it is visible farther east (where I rarely go) and from the summit of Horsetooth Mountain (where I go much more frequently). 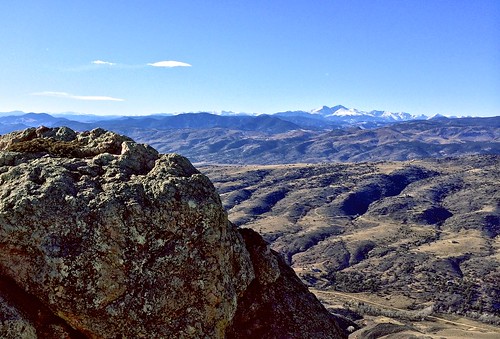 I missed the window last summer to climb it and I didn’t want to miss out again this summer. Longs is the most frequently climbed 14,000 ft mountain in Colorado–not because it’s the easiest, because it’s the most accessible. That means it also attracts the greatest number of people who are completely unprepared, both in terms of fitness and in terms of technical skill. As a result, Longs is responsible for more deaths than any other 14,000 ft mountain in Colorado.

So I wanted to climb it, but I wanted to do so safely. I sent a message out to a handful of friends and I got one bite, my friend Curtis. We drove up to the trailhead early one Saturday morning in August to find the parking lot completely full and cars parked along both sides of the road for about a half mile back. This was around sunrise. Most people got a much earlier start than we did, but we were planning to move pretty quickly. Regardless, we certainly didn’t expect that many cars.

Starting around 9,400 ft, we alternated running and hiking in the early miles as the grade varied a bit. We took the standard, most common route via The Keyhole. The trail was actually pretty horrible. Rather than a smooth uphill the trail had hundreds (thousands?) of stairs built in, so people put a lot of intentional effort into ruining it. There was no regularity to the spacing of the stairs, so each one took a different number of steps to get up. It was awful for running, though I’m not sure I would even want to hike on a trail like that. 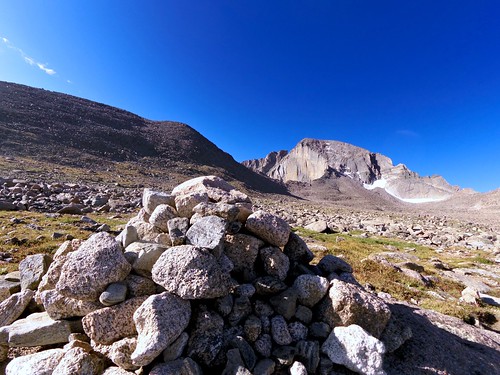 Once we got up to 12,000 ft there wasn’t much more running uphill, but we still hiked quickly. At The Boulder Field the steps thankfully ended, but so did the trail for a bit. We just had to hop across hundreds of huge rocks going in the general direction of The Keyhole. 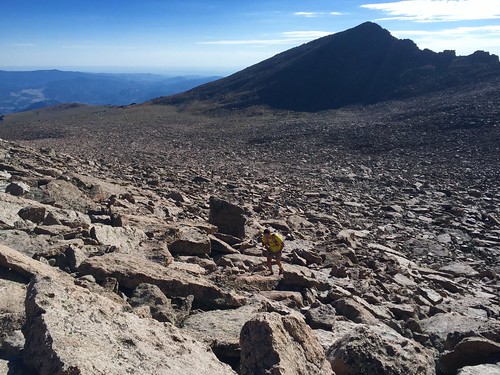 After The Keyhole come the dangerous parts. First is The Ledges, which wasn’t as bad as I had feared. Yes, the trail is narrow. Yes, there is a pretty big drop off. But it was dry and if you paid attention to what you were doing there was very little real danger. 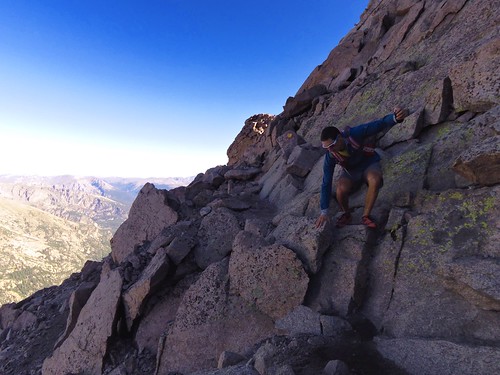 After The Ledges the trail turned sharply upwards into The Trough. Remember all the cars in the parking lot? This is where all the people were. We had only passed a couple dozen people earlier in the trail, but this is where everyone was bunched up. Fortunately, there were a few different lines up the trough so it was relatively easy to pass people. The dangerous part through here was all the loose rock that would occasionally go tumbling down when people took a wrong step. Some people were wearing climbing helmets, and frankly, that wasn’t a terrible idea. 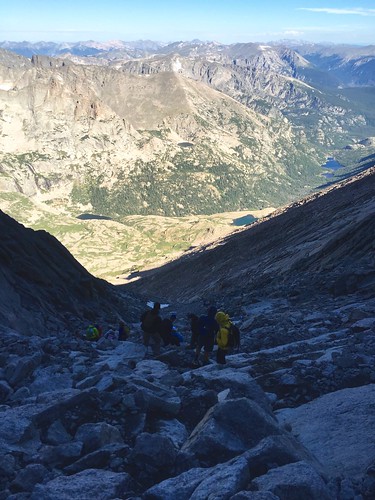 At the very top of The Trough was the hardest part of the climb–an actual climb. It was only about 10 feet high, but everything else on the trail is nothing more than a scramble. Once through The Trough we got to The Narrows, which lives up to it’s name. The trail is narrow. There is a huge drop off. Again, just pay attention and all will be well. 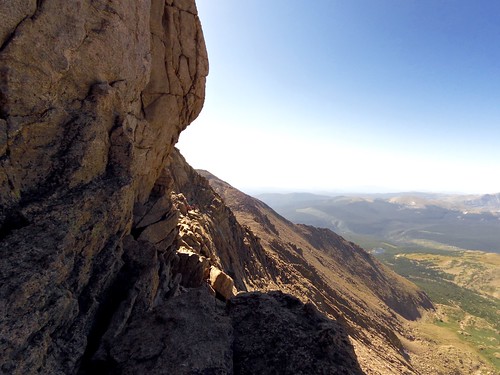 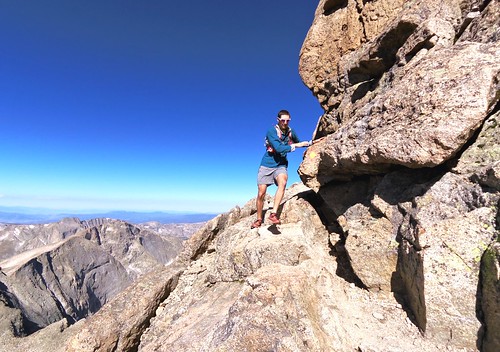 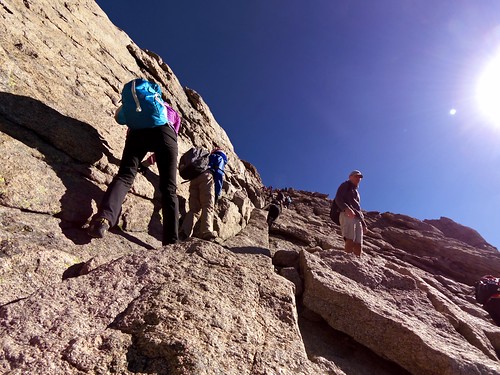 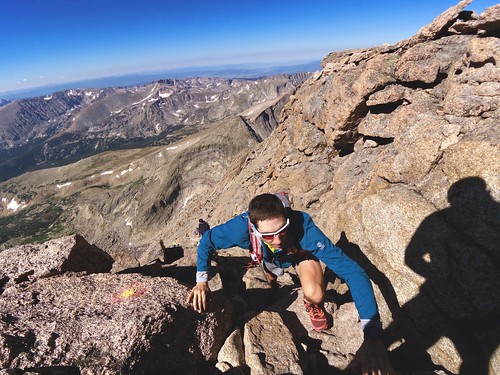 Soon enough we reached the summit. It’s a weird, completely flat area about the size of a football field at 14,259 ft. Parts of The Keyhole, Trough, Narrows, and Homestretch had been windy and cold, but the summit was perfectly calm. There were no clouds for hundreds of miles in any direction. 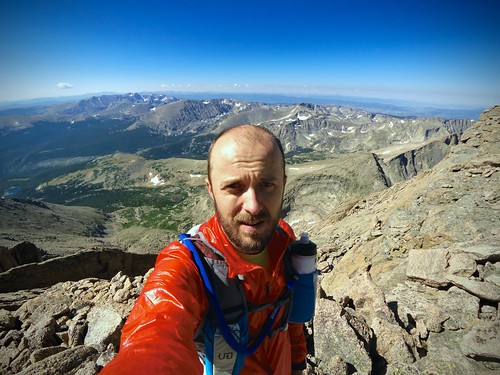 We were cautious but quick on the descent. There would soon be a mass exodus by the hundreds of people at the summit before the afternoon thunderstorms rolled in. I wanted to beat the crowd. Most of the scrambling sections I crab-walked down, facing outward. I kicked more loose rock down The Trough than I would have liked, but fortunately none of it hit anybody.

It was blazing hot by the time we made it back down to The Keyhole and The Boulder Field. We had picked the hottest day of the year to do this. On the long run back down the trail both Curtis and I ran out of water (we packed a lot) and started to get dehydrated. We stumbled a bit, both falling down a couple times. We finally made it back to the car where I had a big jug of ice cold water waiting. We had successfully climbed Longs Peak and made it safely back down to the bottom. At times it wasn’t pretty, but we almost certainly weren’t the least prepared people on the mountain that day.