On my way back from Washington D.C. last weekend I took the opportunity to knock another state off my list of high-points-to-which-I’ve-bicycled. The previous Friday it was Pennsylvania. Monday it was Maryland’s turn. Backbone Mountain, the state’s high point, is nestled in the far western corner of the state, within walking distance from West Virginia.

I spent a good deal of time studying the area with Google Earth on Sunday night in my hotel room. Oakland, Maryland was the clear choice for my starting point. This was only 25 minutes off I-68. The actual peak is not accessible by any road, so I made due with the highest point on the closest road to the peak (U.S. 50), which was conveniently labelled as the Highest Point on the Maryland State Roads System. Perfect.

I had a little bit more time for this ride than I did a few days prior in Pennsylvania, so I decided to do a slightly longer ride and make it a loop instead of simply turning around once I reached the top. Since I would be riding down the other side of the mountain, this meant that I would actually have to ride back over the mountain a second time on a different road in order to return to my starting point. The temperature was a chilly 39˚ when I started, so I bundled up. 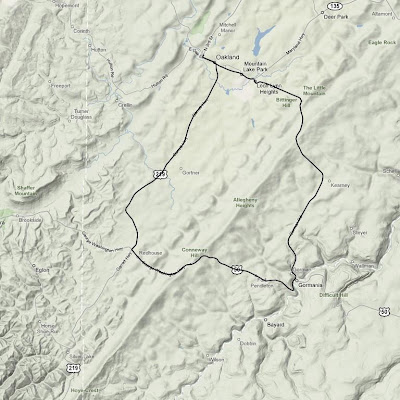 The unfamiliar roads and dense fog made for some interesting navigation challenges. Like Pennsylvania, there were many rolling hills as I started the loop on U.S. 219. Soon after I turned onto U.S. 50 the road turned upward. The climb itself was shorter than Mt. Davis was a few days prior, but it was much steeper. I spent some quality time in my lowest gear moving along at what seemed like a snail’s pace, but I made it. Six states down (TN, NC, KY, HI, PA, MD), 44 to go. 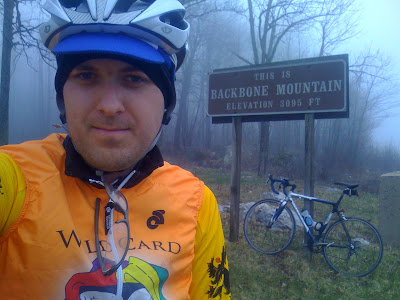 Rob at the top of Backbone Mountain 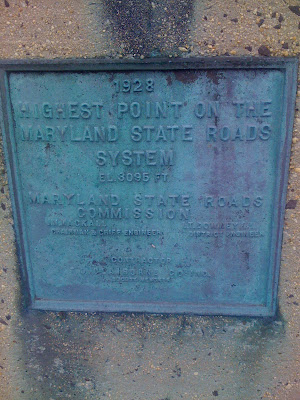 Plaque at the top of Backbone Mountain on U.S. 50

I descended the mountain, turned a corner, then started going back up it again, only this time I was on a different road. The second climb seemed roughly the same length and steepness as the first, though it was even foggier. Again I spent much time in my lowest gear. From the top I coasted most of the rest of the way back to Oakland. 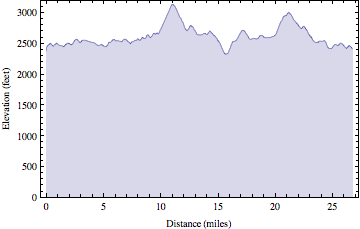 Once back in town I picked up a 12″ veggie sub on wheat bread with pepper jack cheese, lettuce, onions, tomatoes, pickles, green peppers, & black pepper from Subway. Unfortunately, I didn’t realize until I was driving out of town that the “lemonade” was actually some kind of disgusting carbonated junk instead. I think they must have had some hoses crossed in the fountain machine.

It was a nine hour drive back to Urbana from there. Interestingly, an hour or so later the temperature in West Virginia was around 70˚ and I was actually hot for most of the rest of the trip.

2 thoughts on “The Highest Point in Maryland”