Okay, so this is a little late. The weekend before last Melissa and I travelled to Peoria for Mother’s Day weekend and while we were there we both ran in the Race for the Cure. We missed this race last year while we were in Nicaragua, and we were somewhere else the year before. Prior to that Melissa has run this race most every year.

This Peoria Race for the Cure used to be women-only, so I could go and watch but I couldn’t participate. A couple years ago they changed that and allowed men to run and walk at the event. I think this was a good change. For the actual race they still started the women first, so a woman will be the first person to cross the finish line. This is great. Unfortunately, they only left a 10 minute gap between the women’s start & the men’s start. That means that men running 18 minute 5k times will be finishing at the same time as women running 28 minute 5k times and finishing ahead of women running slower than that. Out of a field of 433 women, this turns out to be quite a few (around 250 according to the results). 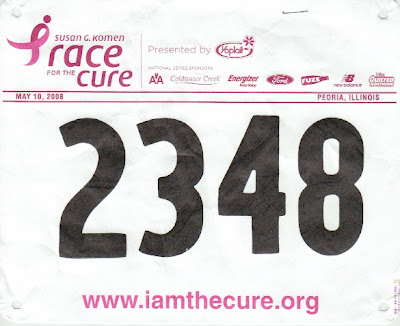 The only real problem, as I alluded to a moment ago, was that I had to dodge 250 women as I was running. We passed a couple of stragglers in the first mile. As soon as we hit the first mile marker we caught up with the back of the pack. Over the second mile there were people spread out maybe five wide across the road, which wasn’t that bad. There was usually a clear path along one side or the other. By the time we reached the third mile the runners were spread out more like eight or ten wide and there wasn’t always a clear path down one side or the other. So for the third mile we had to do some fancy footwork to weave in and out of the runners.

To put it simply, the 10 minute gap was not ideal. I like the idea of having the women start first in this event which is primarily aimed at women, but in that case the gap needs to be longer to give more women a chance to finish and clear the course a little better for the next wave of runners. Even waiting an extra five minutes would make a big difference. Waiting an extra 10 minutes (20 minute gap) would have cleared nearly all the runners off the course.

Despite my complaining, it wasn’t that bad. I was happy just to be able to run my first Race for the Cure. As Melissa mentioned we couldn’t track down any of the little cards to write down the names of people close to you who have been affected by breast cancer, but we certainly had them in our thoughts. My aunt Sharon passed away two years ago after a nine year battle with breast cancer. Despite her deteriorating health she was one of the most cheerful people I’ve ever known. She set great example how to live life to the fullest and I miss her dearly.

3 thoughts on “The Race for the Cure”