Last weekend in West Lafayette, IN some friends and I participated in a bike race. Actually, it was three separate bike races which together formed a stage race. My Wild Card cycling team had 6 riders in the cat 4-5 race: Thomas, Luke, Mark, Karl, Dan, and Rob.

The first stage on Saturday was a criterium in a residential neighborhood near the campus of Purdue University. Criterium races are okay, but they’re definitely my least favorite. The idea is that the course is very short and racers ride several laps around the course for a set period of time. After the set period of time the first person to cross the finish line is the winner. Crits are generally very fast with lots of turning in close proximity to other riders, so there’s a little bit more danger involved. Perhaps danger isn’t the best word. There’s just more possibility for mistakes, both by you and the other riders.

On the bright side the roads are closed to traffic. Err, uh, at least they’re supposed to be. After warming up a little we were informed that the race organizers were having some traffic control problems. First, the course was going to be shortened by half, leaving only a 0.6 mile loop. Second, a couple of the roads were going to be open to traffic!

In the words of GOB Bluth, COME ON!

As we lined up to start the race the officiant explained a few rules. He explicitly stated that riders who get lapped should stay to the far right of the road so as not to interfere with the lead riders. Fine.

The race started. There were 57 riders. Now on narrow residential streets that may or may not be open to traffic, we could really only ride three or four wide across the road. This meant there was a huge distance from the first riders to the last riders at the start, probably a quarter mile. The fastest riders only needed to gain maybe a third of a mile to lap the slowest riders. That’s exactly what happened, and it didn’t take long.

I started a little conservatively in the middle of the pack. The lap had a short steep hill (which was to my advantage), then a long downhill with a sharp turn at the bottom (which was to my disadvantage). I passed around four or five riders each lap for about 24 minutes of the 35 minute race. The leaders were still well ahead of me and were close to catching up and lapping me.

When I finished the lap it sounded like the race directors yelled at me (as well as everyone else) to get off the course. What? The next lap they did the same thing. The pace car passed me and the lead rider was not too far behind so I moved over to the right. When I finished that lap I heard more clearly what the directors were saying, and indeed they told me to get off the course. I stopped (many other riders had already stopped) and asked one of my Wild Card teammates what was going on. Apparently they wanted all lapped riders off the course (I actually hadn’t been lapped yet). Okay, I guess, but that wasn’t what they told us before the race. Why on earth did they change their minds in the middle of the race? I guess I’ll never know. Only 13 riders remained in the race until the finish. My teammate Thomas finished 2nd in the final sprint. Kudos to him.

I apparently tied for 17th place with every other rider who was pulled on the same lap. Since this was a stage race the finishing time actually did matter, so there was some confusion how this was going to work when the majority of riders didn’t actually finish. The organizers prorated the finishing times. I was a little over one minute behind the leader after 24 minutes of racing. Worst case scenario I would have been two minutes behind after 35 minutes of racing. So my prorated time was… 5:21 back.

The prorating was equally bad for everyone, so it’s not really worth getting too upset. But lots of people take themselves a little too seriously and there were about 40 super pissed cyclists after that race.

Early the next morning was the road race. The 22 mile race took place mostly on a four mile loop in the country that included a pretty big hill that was clearly going to be decisive. Again, I started in the middle and worked my way up to the top third or so before we reached the hill. Several riders dropped off the back of the group on the climb. The same thing happened the next lap, and each lap after.

I stayed with the lead group the whole race. The group was down to 25 or so riders by the last lap. I thought someone might try to escape on the last hill, but the strong headwind at the top prevented that. We approached the finish line as a big group. The pace started to slow, as everyone wanted to conserve energy for the finish. Thomas was again well placed near the front of the group, so I shot to the front and whipped up the pace to lead out the sprint for him. I led for 400 meters or so until the sprint started about 200 meters before the finish. Thomas finished 2nd again, though a different rider won. My teammate Luke was also in the lead group and finished 8th. I rolled across the finish line in 15th. I was much happier with the outcome of this race than I was with the previous race. It was good that I not only stayed with the lead group, but was strong enough at the end to try to help Thomas & Luke finish higher up. I didn’t really stand a chance in the sprint anyway.

Finally, on Sunday afternoon was a 5.8 mile time trial. This is a race where each rider is timed individually, starting 30 seconds apart so they can’t work together. The course was the same as part of the road race, and it included the same big hill. As an experienced triathlete I generally enjoy time trials (which are identical to the bike portion of a triathlon). I also enjoy riding on hills. Perfect… except for one thing. Take a guess what that was. 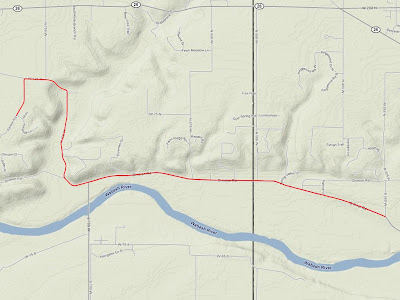 The course was point to point and it was almost entirely into the wind. Heavy riders have a harder time riding uphill than I do. I have a harder time riding into the wind than many others. The reason? Physics. I’m fairly big/tall and I’m kind of lightweight so I have a high surface area to weight ratio. Higher surface area causes more wind resistance. Lower weight (mass) means less momentum one can use to counter this effect. I shouldn’t make excuses, but when it’s related to physics I can hardly resist…

Since the time gaps between the riders were not that large after the criterium and the road race, the time trial results pretty much determined the final overall stage race results. Here’s how the team did:

We were not quite as dominant as we were in Hillsboro, but we had a solid race.

3 thoughts on “The Stage Race”