After ten years of running (1993-2003) and two full seasons of triathlons (2002 & 2003), I tore cartilage in my left knee while running in the spring of 2004. This put both my running and triathlon enjoyment on hold. After months of trying to get back to running and arthroscopic surgery a year later it became clear that running was no longer an option for me. While giving up running was very hard for me, my consolation was that I was still able to bike. Bicycling (which I really only started as a means to an end, triathlon) became my only fitness outlet. Since that time I have biked most days, traveling tens of thousands of miles by my own power.

Last August, after nearly four years off running, I decided on a whim to run a bit. It went well. A few days later I ran again and it went well again. I started running once a week, then twice a week. I mainly ran on grass and dirt, rather than concrete and asphalt, since it is easier on my knee. I slowly started to get my speed back.

By the end of October I felt ready to do a race, the Deuces Wild Duathlon. It had a 2 mile run, a 20 mile bike, then another 2 mile run. I made a good effort and ended up 7th overall and 1st in my age group. At this point I was pretty sure I could make a full return to triathlon.

I did several short races (and one loooong one) over the winter and spring (with some success), but I was really just biding my time until summer. I needed to compete in a triathlon to confirm to myself that the old Rob was back.

Last saturday was the day. Melissa & I travelled to Indianapolis, where I did the Indianapolis Sprint Triathlon at Eagle Creek Park. It was a short race, with a 500 yard swim, a 10 mile bike, and a 3 mile run. I did this race in 2002. In that edition I got a flat tire, which took about 9 minutes to fix, and still finished respectably. I was pretty sure I could do better this time around.

The race was packed. There were over 600 people registered and there was huge, slow moving, line to pick up packets before the race. This caused me to completely miss my warm up before the race. 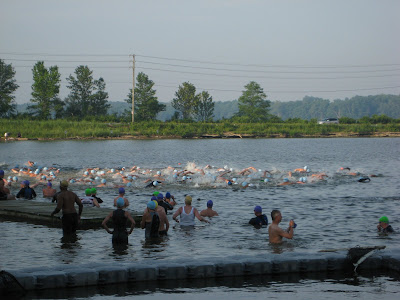 The swim was harder than it should have been. It was only 500 yards, but I had only swam 4 times this year prior to the race. Yes, this was dumb. I was underprepared and it showed. I swam kind of slowly. In the past I would typically finish roughly 60th for the swim in a race this size, where on Saturday I finished 86th. Not terrible, just a little rusty. 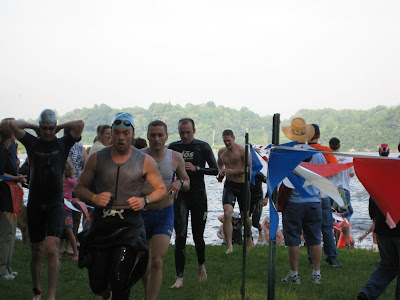 My first transition (swim to bike) took an eternity. Not only did I not practice swimming enough, I didn’t practice using my wetsuit at all. After nearly 5 years I had a really difficult time taking the damn thing off. The transition took about a minute longer than it should have. 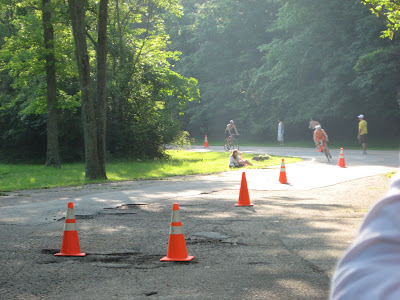 The bike went amazingly well. The 5 years of practice I’ve had really showed. I passed way way way more people than I’ve ever passed in a triathlon bike leg, and I was passed by far fewer people than any other tri I’ve done. In the past the bike leg was always by far my weakest, but that is no longer the case. I finished the bike with the 30th fastest split, averaging 22.2 mph for a not particularly fast course. The beginning of the out and back course had lots of turns. The middle section had big bumps every 50 meters. 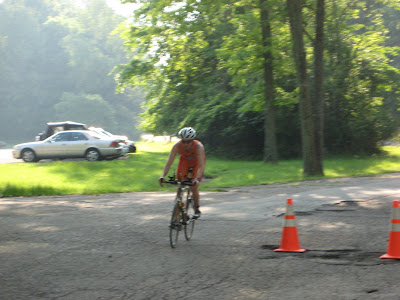 The second transition went much more smoothly. Nothing notable to mention. 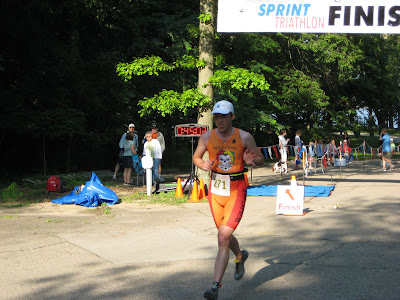 The run was okay. Running after biking is always a little weird. Even though I never practiced this in training, my body handled it pretty well. My legs felt great, but I started to get side stitches while running. This generally doesn’t happen to me, and it was unfortunate that when it did happen it was during a race. I would have liked to have run faster, but I’m content with how it went. My run split of 19:33 (6:31 pace) was the 39th fastest. I was hoping to run under 19:00, with a pie in the sky goal of closer to 18:00. 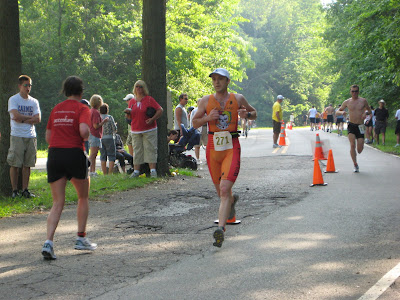 I finished 36th overall (out of 559 finishers), and 8th in my age group (for which I won a race towel). At some point in the past 5 years triathlons changed age grouping from age on race day to age at the end of race year, meaning I was competing as a 30 year old. The 30-34 age group is typically much tougher in triathlons than 25-29. 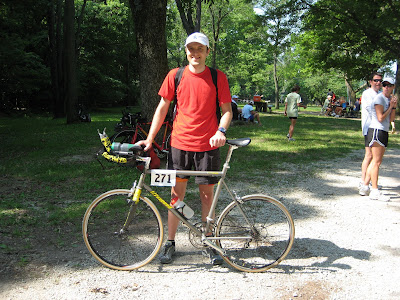 I did well, but I had room for improvement. The good news is that the old Rob is back. Surely I will have a few more chances this summer to compete in other triathlons and hopefully continue to improve.

5 thoughts on “The Confirmation”