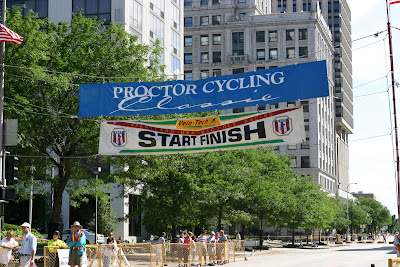 Today was the Proctor Classic criterium bicycle race in downtown Peoria. I, along with six other Wild Card Cycling riders, did the Cat 5 (i.e. beginner) race. The good news was that we had a pretty sizable group of very good riders who can work well together. The bad news was that it was a criterium, by far my least favorite type of bike race. The course was a one mile loop on closed (unlike West Lafayette) city streets. There were eight turns each loop, most of which were only separated by one block each. This is a lot of turning, and the speed was high, and that always makes me a little bit nervous. 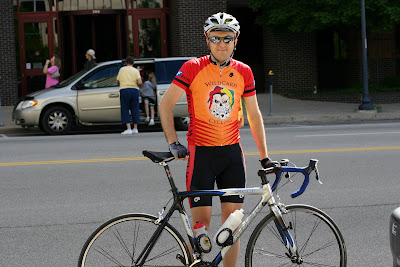 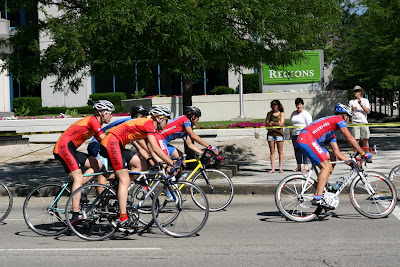 The race started well enough. I was near the front. I dropped a few positions each turn and I moved up a few positions on the longer straight sections. On the third lap I was near the middle of the pack when the guy right in front of me (it’s always* the guy right in front of me) slid out in one of the turns. I had to brake hard and turn sharply to avoid running into him. This crash split the field in half. I accelerated as soon as possible, but at the point it was too late. The front half of the field had a gap and they were going too fast for me (or anyone else behind the crash) to catch them.

I rode the rest of the race by myself. It kind of sucked to watch the leaders pull farther ahead of me each lap, but at the same time it was a bit of relief to not have to worry about other riders in the turns. Nobody passed me the rest of the race, while each lap I would pass one, or two, or three riders who dropped from the lead group. 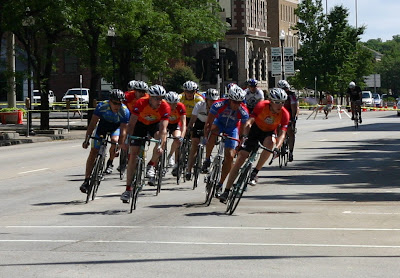 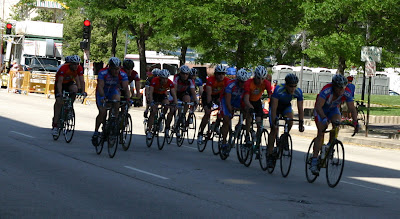 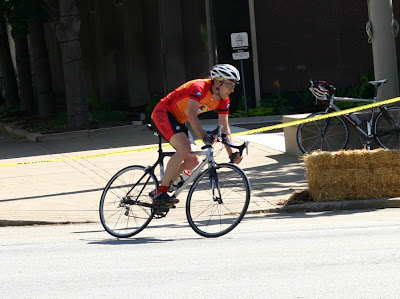 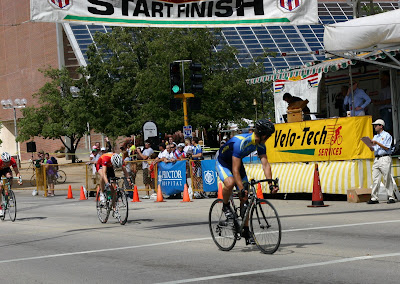 I don’t know all the details how the race unfolded at the front, but Tom finished in 2nd place, and Stew finished in 3rd. Dan and Mark also finished in the top dozen or so. I’m 95% sure I was the first person to finish behind the lead group, but the results showed me near the bottom of the field. I questioned the race official about this and she agreed this was incorrect. She went to go re-figure the results while we waited around and watched the next couple races. I never did hear back. I wonder what my official place will be…

After our race was a junior race. Next was the Masters Cat-1,2,3 race, which was won by Dave Stone, a guy who sometimes trains with us. There were many other races throughout the day, but Melissa and I had to take off at this point to visit her parents before heading back to Urbana to walk Ravage (we were dog-sitting). 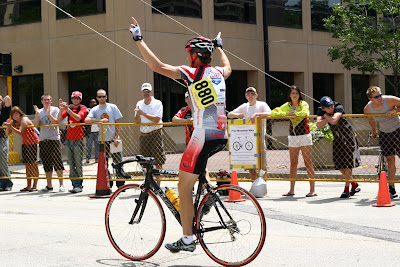 Dave Stone (who sometimes trains with us) won the Masters Cat-1,2,3 race

So the race went well for the team, as well as other local riders. It was only so-so for me, but at least I learned a few things. Next time I will be a little wiser and hopefully a little luckier.

Update: The results have been posted and they correctly list me behind Mark, which as it turns out was 17th.

3 thoughts on “The Proctor Classic”