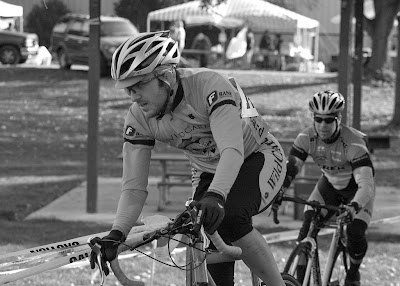 Photo by Eric Smith, all others by Melissa

On Sunday Melissa and I headed to Carpentersville, a northwest suburb of Chicago, for the Carpenter Park Cyclocross race. This race is #4 in the Chicago Cyclocross Cup, a weekly series of races each fall.

Cyclocross is a fascinating type of bike racing. It began a hundred or so years ago as a way for road cyclists to maintain their fitness in the off season. The race organizers go out of their way to make the race as hard as possible. The races have… 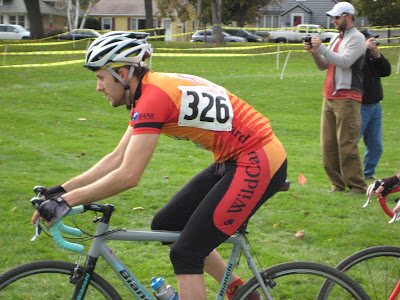 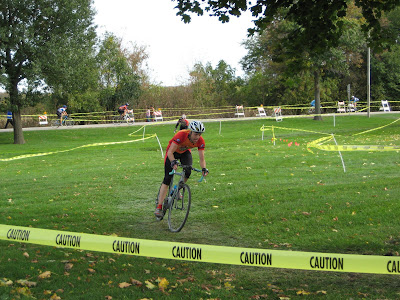 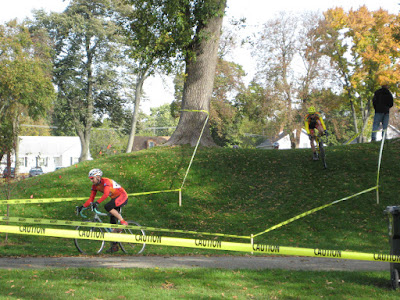 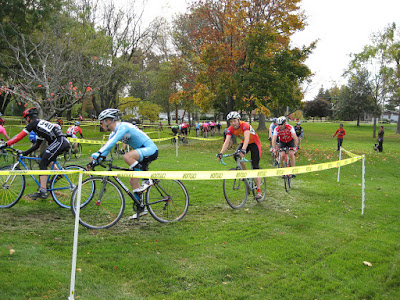 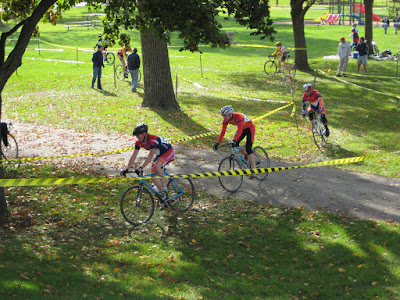 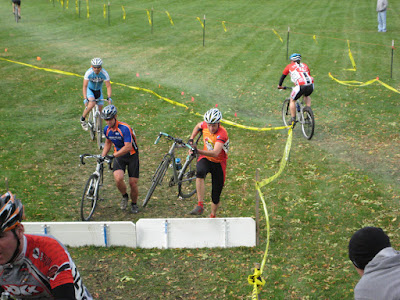 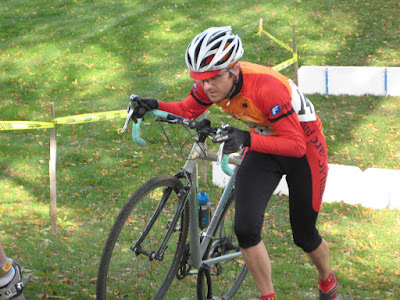 barriers to run and jump over, 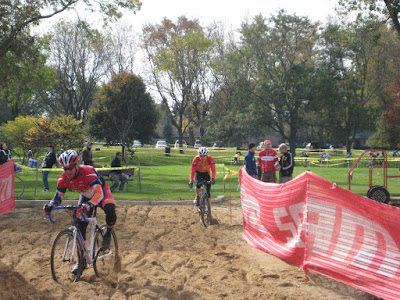 Riders make loops on a relatively short course for a set amount of time, kind of like a criterium. Cyclocross bikes are kind of a cross between road bikes & mountain bikes. They basically have the frame of a road bikes, but wide knobby tires and cantilever brakes to allow mud/grass/leaves on the tires to pass through.

This particular event had multiple races for different categories of riders. I raced twice, first in the Masters 30+ race in the morning, then later in the category 4a race in the afternoon (this is why I’m wearing long sleeves in some of the photos and short sleeves others).

The masters race lasted 45 minutes and it was exhausting. Cyclocross is anaerobic–a 100% effort the entire time. I started towards the back of the pack and moved up several places during the race. Passing is a challenge, because there are so many tight turns. I ended up 19th out of 31 riders in the 30+ division. My friends Greg & Gene raced at the same time, though in different divisions. Gene was 18th in the 40+ division and Greg was 4th in the 50+ division.

Between my two races we watched our teammate Anona finish 4th in her first cyclocross race, the womens category 4 race.

The mens category 4a race was much bigger, with 52 people starting at the same time. I got off to a bad start and spent most of the race wasting energy passing people. Fortunately this race was only 30 minutes, and it went much faster. I finished 29th. Two other local riders fared slightly better. Nick was 7th, and Dan was 18th. They both intended to ride the cat 3 race, but they arrived too late and rode the cat 4a race instead.

After the 4a race we checked the results and we were about to leave when I looked up and saw Erik the Bike Destroyer riding the cat 4b race, so we stuck around and chatted a bit with him as he collapsed onto the ground after the finish. Ah, cyclocross.

So, I wasn’t terribly successful, but I finished both races (unlike my 1st cross race) and I had a great time. I’m still pretty new to this. These were my 3rd and 4th cross races and they were good learning experiences for me. I’ll probably try some more this fall.

After the race we made the obligatory stop at Veggie Bite in Chicago. We met my cousin Scott and his lady friend at the Wicker Park location (to which we had never been). It was much busier than the south side location where we’ve gone before. The BBQ tofu was fantastic.