The 2008 Chicago Marathon was yesterday. A number of acquaintances from the local Second Wind Running Club ran it, along with 40,000 others. Seven years ago I ran the Chicago Marathon. It was one of the most miserable experiences of my life.

To put things into perspective, I used to be a very good runner. I’m not going to say I’m bad now, but I used to be much, much better. My freshman year of college, when I was running cross country and track at the University of Illinois, I did a 20 mile training run in around 2h06m (6:20-ish pace) and it hardly phased me. The following day I did 5 x 1 mile intervals at 5:00 pace. If I had run a marathon when I was in this peak condition I probably could have done it in 2h45m or so.

I continued running even after my collegiate career ended. I ran relatively well, but I still foolishly held myself to the same standards as I did at my peak, so I was never really satisfied with my performances. My last year of college my friend Mike Perry decided to run the Chicago Marathon and I trained with him a couple times each week. He ran really well, finishing in a time of 2h55m.

Shortly after that I got a job. I worked insane hours for the first 6-8 months. I ran almost every day, but I was no longer walking 4 miles to and from class each day. I ran less. I sat more. I gained weight. By early summer 2001 I had had enough. I decided to run the Chicago Marathon. I roughly followed a training plan I found on the internet that lasted 14-16 weeks or so. I worked my way back up to running 17-18 miles.

The morning of the race I was so nervous I couldn’t eat anything. I ate nothing. My stomach felt like it was filled with vomiting butterflies. I put an enormous amount of pressure on myself. After all, this was my marathon debut.

I started fast. The first 8 miles I cruised, exactly as I intended. One third of the way through the race I was on pace to run 3h00m. By mile 10 my stomach was growling (a lot). At mile 14 I ate a banana at an aid station, but it was too late. I stopped to walk for the first time. I was barely half way through the 26.2 mile race and I had bonked.

By mile 16 my hamstrings started to cramp up. I couldn’t run farther than a quarter mile before having to stop to stretch out. The last 10 miles of the race were truly miserable, and they lasted an eternity. I had to stop in the middle of the finishing straight in front of the huge crowd to stretch out a cramp in my calf. The calf cramped again about 10 meters from the finish but I couldn’t stop at that point, so I hopped the last 10 meters across the line. I finished in 4h18m, about an hour slower than my (somewhat unrealistic) worst case scenario estimate. I now have a much greater respect for the distance. 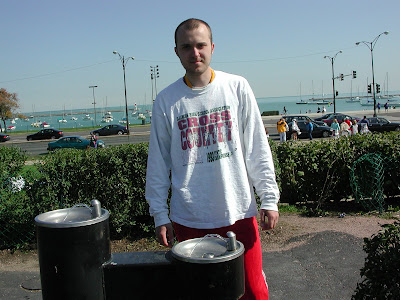 Rob, hobbling back to car, beaten

I ran a much faster time (3h50m) in my second marathon (which I ran in a snowstorm), but the experience was almost as miserable as the first. I have also run two 28.4 mile ultramarathons since then, both of which went much, much better. If my knees hold out I will probably run another road marathon next April at the inaugural Illinois Marathon. I think I’m due for a good one (i.e. enjoyable) someday.

2 thoughts on “The Marathon”