I wanted to do another 5K this fall, but I had a hard time fitting one into my schedule. It took me a few weeks to fully recover from my 30 mile run. Then in two weeks I’ll be running the Tecumseh trail marathon in Indiana. I heard about this Run for the Library race in Mahomet and it seemed like it would work. As per usual, I decided at the last minute (late Friday evening) to do it.

I looked at the results from previous years and figured if I had a good race I could finish in the top 10, maybe even top 5. The highest placings in this race were dominated by high school runners who can typically run these shorter distances much faster than old farts like me.

It was 22˚ when I woke up Saturday morning. I drove out to Mahomet, registered for the race, and warmed up a little. By the time the race started it had warmed up to 24˚. This is probably the coldest temperature I’ve run in this winter. While warming up I noticed a number of high school aged runners. I also saw a guy my age, Chris, who I ran against in high school. We’ve competed at least three times since then and he just barely beat all three times. Photo courtesy of Mahomet Library. I’m on the far right wearing all black with a white hat.

The race started and immediately one of the high schoolers took off sprinting, much to the confusion of the rest of the runners. I started out near the front. I became concerned after 200-300 meters when only Chris and two high schoolers were in front of me. Was I going too fast? Was I going to fade away? After a half mile I passed both the high schoolers and it was just Chris & me. I was feeling really good. We ran together for .75 miles. We passed the mile mark at 5:37, exactly where I wanted to be. What a relief.

Shortly after the mile mark I started to pull away from Chris. I have never been able to run the second mile of a 5K as fast as the first, but I was feeling so good I just kept going and going. I passed the two mile mark and my split was also 5:37. Even splits for the first two miles of a 5K was unprecedented for me.

During the last half mile we turned into a strong headwind on a fairly open road, so I slowed down a bit. I managed to hang onto the lead and finished in 17:40. I’ve only run two 5Ks faster than that, and both were on courses that were short (less than 5K). A bunch of my friends from Second Wind running club were working the finish line and they all congratulated me on the great run. 13 seconds later Chris came in for second place. 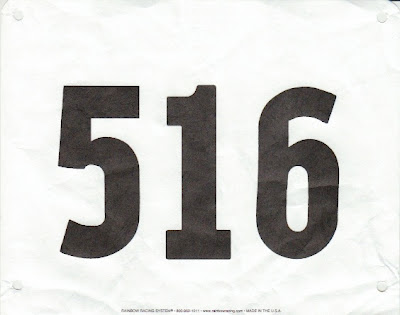 We waited a good minute and a half before the next pack came in. It was mostly the high schoolers (including a couple who puked upon crossing the finish line). Amongst them was the winner of the women’s race, my new friend Ellen. She is an extraordinary ultra-marathon runner. She runs (and wins) races in the 30-50 mile range. Yesterday she set a new 5K personal record.

After the race I chatted a lot with Chris and we caught up a little bit while running a mile to cool down. Next, we went indoors for a pancake breakfast (which I skipped) and award ceremony. 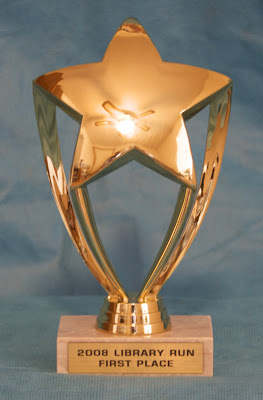 Normally the story would end there, but I have this marathon coming up. I needed to do a long run this weekend, but I don’t let myself run two days in a row (due to my past knee problems). So after the awards I went with Ellen and Brian (another friend from Second Wind) a short ways to the Buffalo Trace trails at Lake of the Woods park and we ran. Once there, we caught up with more of our trail running friends. Ellen & I ran three loops on the five mile trail. I ended up with 20.5 miles in total. Unsurprisingly, I did a lot of eating and sleeping the rest of the day.

7 thoughts on “The Victory”